The Fleetwood Heritage Leisure Trust have used their newly revamped website to announce details of their latest project to create a new static display tram, utilising Blackpool Balloon car 726. This tram is one of several which is currently in outside storage at the Fleetwood fish docks, but could soon be set for a radical makeover which would create a new illuminated feature tram for display near the Pleasure Beach.

The ambitious plan would see 726 transformed into a new static illuminated tram, based on the fondly remembered ‘Progress’ car from the 1940s which was sadly broken up many years ago. Intended to resemble a futuristic Blackpool tram, the result actually ended up looking more like a Balloon car and so transforming 726 into something resembling it should not prove too problematic. It is intended that the tram would then replace Brush Railcoach 290 on the display siding opposite the Pleasure Beach entrance, with 290 likely to be used for another display elsewhere at some point in the future. The project seems to have gained the backing of both Blackpool Transport and the Council’s Illuminations Department, although quite what their input will be remains a mystery at present. Whilst the finished product should look considerably better than 290 does right now, it is perhaps a shame that money from the illuminations funds is likely to be used to create another static exhibit, when the cash could undoubtedly be put to good use by BTS. It also remains to be seen how the enthusiast community will respond to one of the most traditional of the surviving Balloon cars being treated this way, although in fairness to its owners, sister car 710 remains in their care and will presumably be earmarked for more sympathetic attention in due course, whilst there are of course several other Balloons both at Blackpool and elsewhere which will survive in a more authentic condition.

As if one project announcement wasn’t enough, the Trust have also revealed that they are involved in a potential scheme to renovate the ornate northbound tram shelter and office building at Bispham Station. Although part of this building is still used today as a waiting area for tramway passengers, a plan has been put forward to refurbish it as a small visitor centre in which the FHLT would be able to display some of the smaller items in its collection. The Bispham Traders Association are working closely with the Trustees to develop a joint scheme, although no timescales have yet been given. It also remains to be seen whether this is a scaled-back museum plan, which could potentially replace their goal of creating a tram museum in Fleetwood. 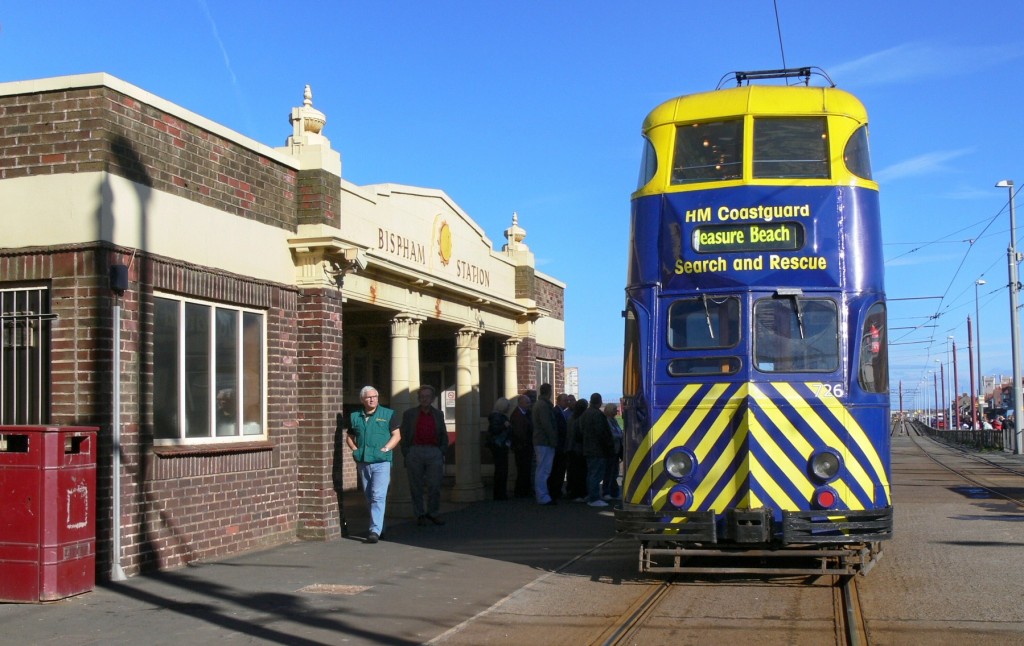 The next two likely subjects of the Fleetwood Heritage Leisure Trust's attentions - Balloon car 726 and the Bispham Station building - seen in glorious sunshine in September 2010. This was 726's final season of operation before it was sold to the Trust. (Photo by Andrew Waddington)

6 Responses to Progress for Blackpool Balloon 726?