Posted on Tuesday 17 December 2013 by Gareth Prior

Another tram has made it into Edinburgh city centre, this time to show off the new look for the trams. The mainly white livery remains but Edinburgh Trams branding has been added along with madder stripes both above and below the window with grey and black also completing the look. Tram drivers and other operational staff were also on hand to show off their new uniforms as preparations continue for the opening of the tramway.

This is actually the third different livery to be carried by the new trams in Edinburgh – not bad for a system which hasn’t actually carried an official passenger yet! The first livery was carried by the mock-up and was in the then Lothian Buses livery of White and harlequins before the second mainly white livery (as seen on all the trams which have been used on testing and driver training so far). At least two trams have been completed in this latest livery: 261 as shown in the official press release and 265 which was used to show off the livery at St Andrew Square.

As well as the new look for the trams – which will also be adapted for use on Lothian Buses as part of the new Transport for Edinburgh initiative – another 2.1km section of tramway has been handed over to the Council. This section – between Gogar Depot and Edinburgh Park tramstop – will now be made available for regular driver training and means that over 5km of the line is under the control of the Council. So far, apart from a few high profile test runs, all tram movements have been restricted to the section between Gogar and the Airport but that can now change and the tram can stretch their legs a bit more.

Interestingly the latest press release from Edinburgh Trams now states the opening of the line as spring 2014 rather than the previous date of May 2014. Could this mean that we will see an opening ahead of the revised schedule or could it just mean they are hedging their bets and we are trying to read too much into a basic statement?!

Cllr Lesley Hinds, Transport Convener on the City of Edinburgh Council, said: “With full line testing underway and the trams now getting ready for service, everyone involved is completely focussed on the launch in Spring 2014. The new look has been developed economically in a way that reflects the integrated nature of the services offered and when trams get up and running I think customers will see the benefits. Transport for Edinburgh is a new approach to transport in our city, one that prioritises the customer and the future economic growth of Edinburgh. We’re already integrating ticketing, timetabling and customer services to make journeys easier but there’s much more opportunity ahead to develop wider transport policy in a way that benefits everyone who wants to get around the city, whether they use bus, tram, bike or go on foot. We are now in final stages of the tram project and with the track between Gogar and Edinburgh Park now available to Edinburgh Trams, our drivers and the wider team can further extend their training programme as we push towards a passenger service.

The new Edinburgh Trams website has also launched today, which will be developed as the opening date approaches. You can view the website at http://www.edinburghtrams.com/ 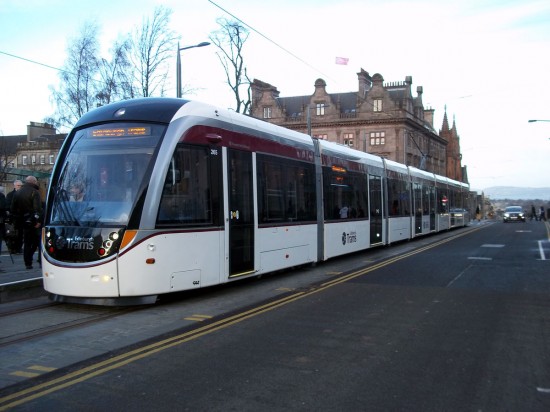 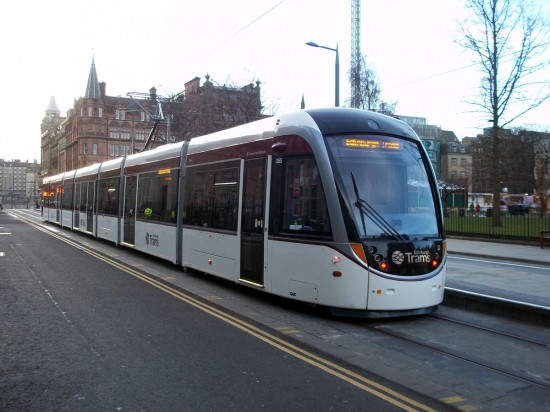 The new look for Edinburgh Trams is shown off to good effect on 265 at St Andrew Square stop on 17th December during the official launch of the new livery. (Both photos: Alasdair McFarlane)