“Picture in Time” returns with another series of images featuring traditional trams and our new subject over the next few weeks will be the Gateshead Garden Festival.

The Gateshead Garden Festival took place between 18th May and 21st October 1990 – the fourth of five Garden Festivals held between 1984 and 1992 and the second to feature an internal tramway. With the site at Gateshead split into four zones various different forms of transport were provided including a 15” gauge railway, a monorail, a road train and, of course (otherwise we wouldn’t be featuring it!), a tramway.

The tramway ran for 500 metres along a single track on The Boulevard (an avenue which connected two of the zones of the festival site) and there was a purpose built single track depot at both ends of the tramway with a short passing loop just outside each. Travel on the trams was free as it was included in the overall £6 admission price to the Festival.

The tramway was due to have been operated by three cars loaned from Crich. These should have been three local trams – Sunderland 100 (better known as Metropolitan Electric Tramways 331 today). Newcastle 102 and Gateshead 5. Unfortunately, ahead of the Festival opening a derailment saw 5 replaced by Blackpool 167.

Probably the tram which stood out the most to visitors was Sunderland 100 which received a special livery advertising British Steel, replacing its Sunderland colour scheme. Obviously not to purists tastes the tram received this special livery in recognition of British Steel’s sponsorship of the restoration of the tram. 100 ran the most miles of the three trams at the Festival totalling 2127.

In the below first photo we see Sunderland 100 as it moves off from the terminus at the north end of the tramway, just beyond the southern end of the Dunston zone. The destination, Wheatsheaf, was the location of the depot of Sunderland Corporation Tramways, which operated from 1900 to 1954. Wheatsheaf depot was by a major road junction on the north bank of the River Wear, not far from the old Monkwearmouth railway station and roughly halfway between today’s Stadium of Light and St Peter’s Metro stations. The Wheatsheaf pub remains open today. 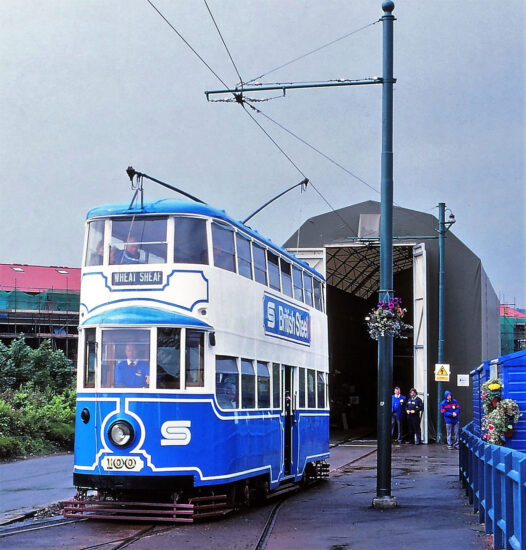 Another shot of 100 as it heads north along The Boulevard. On the left of the picture is the pedestrian route joining Dunston to Eslington, while the roadway followed by the road train is on the other side. Southwick was a Sunderland Corporation Tramways terminus on the north bank of the Wear at the end of a double-track route running west from Wheatsheaf depot. 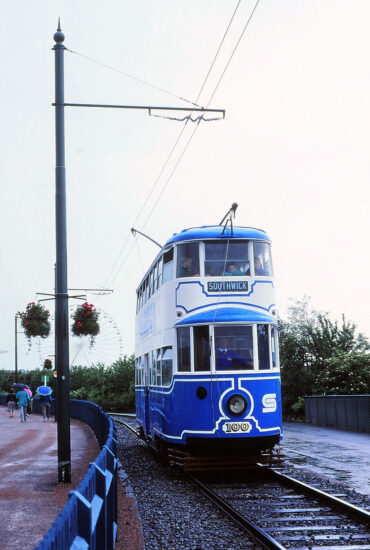 Both Photographs by Donald Brooks, July 1990