In Pictures: Problems on Supertram

Posted on Monday 4 April 2022 by Gareth Prior

The start of April has not exactly been the smoothest for Stagecoach Stagecoach Supertram as there has been major disruption to services with overhead problems in the Dontesk Way and Glossop Road areas causing issues. The Donetsk Way issue has been ongoing since Friday 1st April whilst a bus collided with an overhead support pole at Glossop Road on Sunday 3rd April.

The issues at Donetsk Way first came about on Friday 1st April with services on the Blue route then only able to run from Malin Bridge to Donetsk Way. No trams are able to run any further along the route to Halfway although as would be expected there is ticket acceptance in place on local bus services in the area to allow passengers to complete their journeys.

The problem appears to be a sagging overhead wire on a section of the line at Donetsk Way which will require maintenance work to be completed before trams can start to run in this area again.

Repairs of this problem are expected to take a few days with no service expected back to Halfway until Wednesday 6th April at the earliest.

And then to compound matters, Sunday 3rd April saw a non-tram accident resulting in a bus colliding with an overhead pole at Glossop Road. This meant that it was impossible for any services to run between Cathedral and Shalesmoor on either the Blue or Yellow routes. Fortunately, there were two trams stranded in the section of tramway beyond Shalesmoor which meant a limited service could run from there to Malin Bridge and Middlewood whilst repairs took place at Glossop Road.

All this means that the following services were running on Supertram:

Sunday 3rd April had already seen a revised service planned with rail replacement works at Granville Road meaning there were no trams from Sheffield Station to Halfway anyway. All in all plenty of disruption! 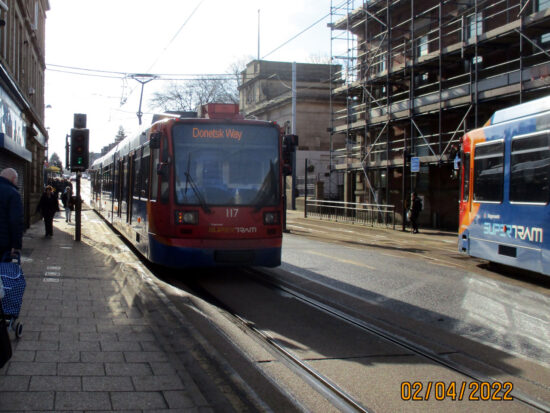 117 showing the unusual destination of Donetsk Way at Hillsborough. 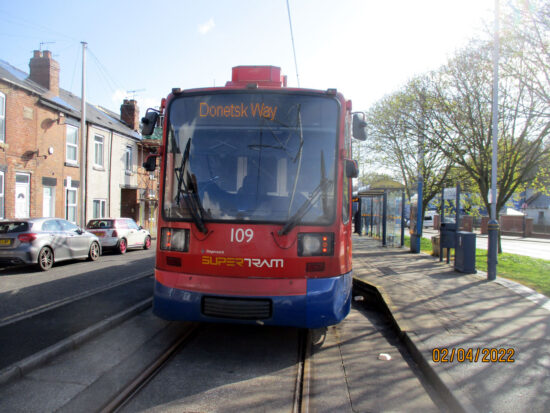 109 also with Donetsk Way as the destination as it stands at Malin Bridge. (Both Photographs by Stuart Cooke, 2nd April 2022)