Posted on Wednesday 22 December 2021 by Gareth Prior

Back at the start of November it was announced that you could now pay for tickets on the trams in Blackpool using contactless payment methods for the first time – and now this is being publicised with window posters on the trams.

Contactless cards and other methods such as Google and Apple pay can be used in lieu of cash on board the trams to purchase single and the majority of Saver tickets (all except for the 30 day version). There’s no need for tapping in and out as you get on and off the trams as it is just a replacement for cash but its not the end of cash payments on board the Flexity trams as it is still accepted too. Cards are only accepted on the trams if they are contactless enabled and you still can’t pay by inputting your PIN.

In other news from Blackpool – not previously reported on these pages – the trams are now running to a revised service frequency during the week. The works at North Pier have been completed but in spite of that and to allow a consistent service to run the reduced frequencies will continue to run:

This timetable is expected to continue until 2nd January after which presumably the full winter service will be introduced with the Illuminations switching off after Monday 3rd January. Visit https://www.blackpooltransport.com/routes/BLAC/Tram?date=2021-12-22&direction=outbound (to check a specific day change the boxes on this page) to see the timetable in operation. 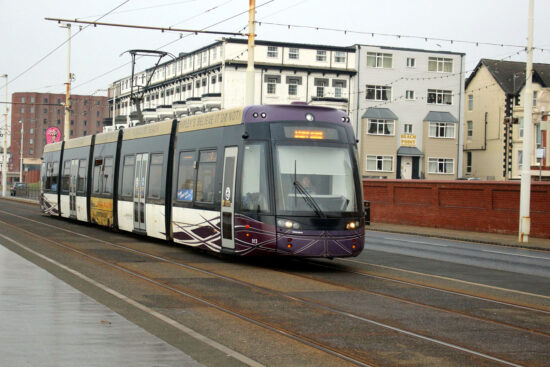 013 passes the Imperial Hotel on its way south. The contactless sign can be seen in the second window back. 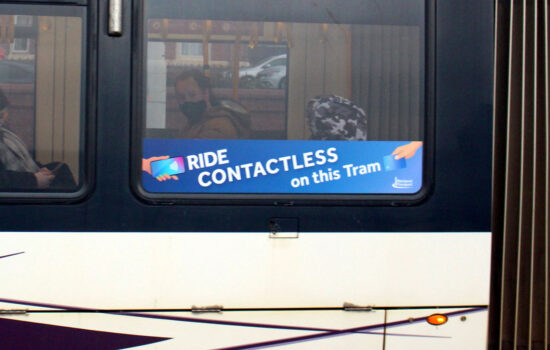 A close-up of the window signs. (Both Photographs by Tony Armitage, 22nd December 2021)