Posted on Saturday 18 December 2021 by Gareth Prior

There has been a new tram naming in Nottingham with Citadis 220 being named “Professor Sir Martyn Poliakoff” in honour of the celebrated professor at the University of Nottingham, a global leader in science and a familiar face to millions through his hit You Tube science videos. 220 had previously been designated as the Nurse of the Year tram with a different name carried each year after that ceremony although that purpose would seem to have ended for the tram now.

The name was unveiled in a special ceremony at Wilkinson Street Depot on Thursday 16th December – Professor Poliakoff’s 74th birthday. He attended along with his wife and specially invited guests.

Tim Hesketh, Nottingham Tramlink CEO, said: “Professor Poliakoff is not only a Nottingham hero but also a science icon to millions worldwide through his work to make science fun and accessible to a global online audience. We are delighted to name a tram in Sir Martyn’s honour and hope that the thousands of Nottingham students using the tram each day will see his name and be inspired by his ground-breaking achievements.”

The naming has been made in recognition of Professor Poliakoff’s achievements through more than 40 years at the University of Nottingham where his pioneering scientific work has seen him become a global leader in green and sustainable chemistry. He has also sought to mark science fun and accessible to millions through a series of online videos where he is known over the world as the presenter of a You Tube series Periodic Table of Videos – which averages over 205 million views per video.

The naming of the tram marks the final tram to be permanently named before NET moves to a new Community Hero tram naming project that will be announced in more details early in 2022.

Professor Poliakoff said: “I am hugely honoured to have a tram named after me and it’s very exciting to know my students could be arriving at university on the Sir Martyn Poliakoff tram! Even though my career and passion for communicating science has taken me all over the world, Nottingham will always be home so this honour is really very special.” 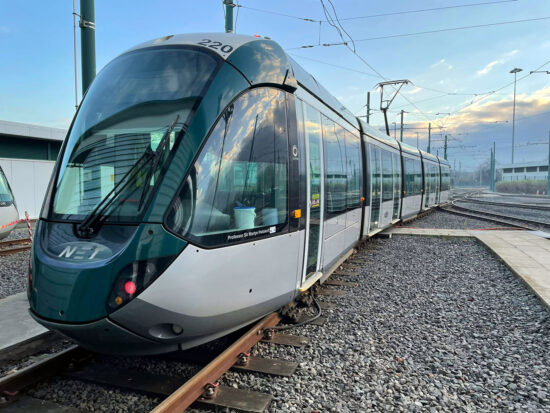 220 with its new name in the yard at Wilkinson Street Depot. (Photograph by Ryan Breen)