As we reach another Bank Holiday (but its now three months until the next one!) this week we will having another week of our “Lockdown Walks” series as we take a look at trams running during the various lockdowns and other restrictions we have had in recent months. This edition heads to Edinburgh as we take a trip just outside of the city centre.

One of the grandest looking stops on the Edinburgh Trams system is that at Murrayfield Stadium which has a large set of steps leading to street level – although after a day’s work that can probably be quit daunting having to climb those! Murrayfield Stadium – the home of Scottish rugby – was opened in 1925 and its highest attendance was 104,000 in March 1975 when Scotland defeated Wales. At that time it only had one stand and three embankments whereas the modern day stadium features stands on all sides (east side in 1983, north and south in 1993 and west stand in 1994) giving it a capacity of 67,144 – the largest in Scotland and fifth largest in the UK. With a tramstop now located here, trams play a major role in transporting the crowds to Rugby matches and the odd concert when restrictions allow. 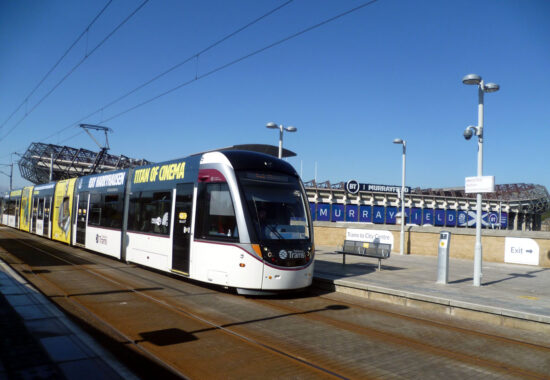 In this image we see 257 arriving at Murrayfield Stadium bound for the city. The tram advertises the Ray Harryhausen – Titan of Cinema Exhibition at the Scottish National Museum of Modern Art which will reopen on 26th April and has now been extended until February 2022. (Photograph by Roy Calderwood, 14th April 2021)