Posted on Tuesday 13 April 2021 by Gareth Prior

Over the next few weeks our modern tram edition of “Picture in Time” will be heading back to the early days of Croydon Tramlink concentrating mainly on the construction period with a series of images courtesy of Amey Transport Infrastructure.

Amey Construction Limited along with Sir Robert McAlpine in a Construction Joint Venture won the contract to construct the system with work initially getting under way in January 1997, including the closure of the national rail lines which would form part of the eventual network of lines. It has been hoped that the system would open in November 1999 but slight delays saw the first trams run in May 2000.

As with any tram system one of the big construction jobs is the depot to not only provide storage for the trams but also facilities for general maintenance and for Tramlink this was built at Therapia Lane on the site of old railway sidings. The structure here was built during 1998 and we see the finished product in the below photo looking at the eastern entrance (there are entrances at both ends of the facility). 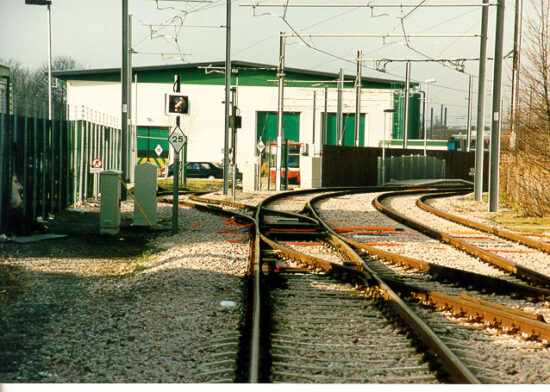