In this edition of “Trams &” we take a trip to Beamish to see one of the resident trams alongside a visiting road locomotive.

Sunderland 16 has been running at Beamish since its restoration was completed in 2013 and with its high capacity will have come across many different vintage vehicles when operating around the museum circuit, especially at special events such as the Great North Steam Fair in 2011 which is when this image was caught on camera.

As Sunderland 16 pauses at the Town tram stop McLaren Road Locomotive 1110 and a trailer is taking a rest alongside the tramway outside the Masonic Hall. A car is also seen behind the tram in this typical scene from one of Beamish’s big transport events. This is 14th April 2011. 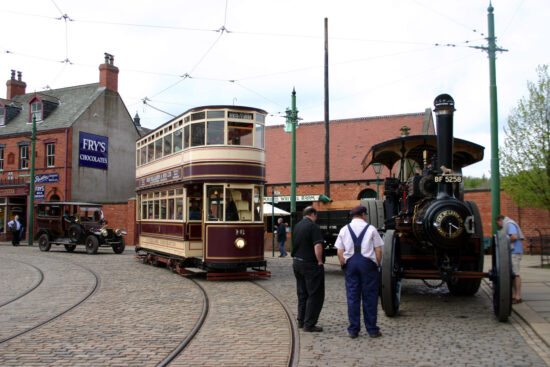