As we continue our look at some of the Works vehicles of Blackpool Corporation Transport in 1975 we find ourselves looking at one which was used mainly to tow buses but was also occasionally used for trams – it is a Diamond T truck.

This vehicle was new to Blackpool Corporation Transport in 1947 and became a important member of the fleet being utilised to rescue broken down buses across Blackpool. It started off life in a green livery – as seen in the below photo – and at the time of this photo there is no clear fleet number displayed although elsewhere on the internet it suggests at the time it may have been numbered 115 (a renumbering to 405 occurred during the 1970s though). Although no number can be discerned in this photo what can be seen is its registration number 001 FR. The vehicle would remain with Blackpool Transport all the way until 1996 when it was finally withdrawn and sold on for further use (by which time it had been reliveried yellow and numbered 905).

In this photo we see the Diamond T in front of Rigby Road Depot in 1975. 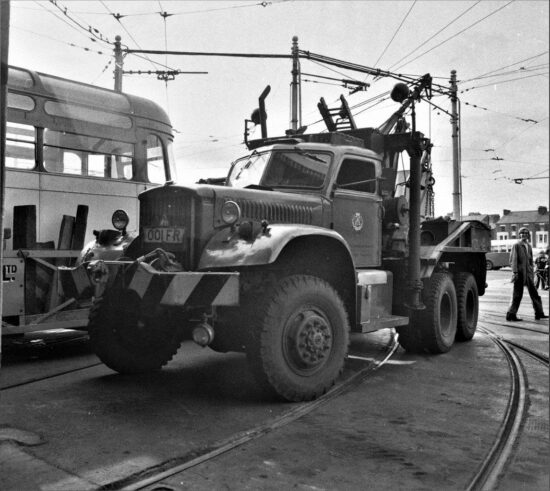