As with last week’s archive Blackpool tram image we are down at Rigby Road Depot for this latest edition of “Picture in Time”.

This image was captured in early September 1976 at a time when there were no restrictions for where enthusiasts – or anyone for that matter! – could go allowing the chance to capture images of all manner of trams in the depot. This included this view just in front of the Electrical Compound where two of the Works Cars were stabled on this occasion – both cars which remain in existence today.

At the front is Engineering Car 753 which, as I’m sure most of you reading this will be aware, started off life as Standard Car 143 and has returned to that guise today even if it isn’t currently operational. It had been converted to a Works Car in 1958 and would remain in use like this until a fire in 1990. Preserved by the Fylde Transport Trust an extensive restoration followed and hopefully as 2021 progresses it may finally enter full service. Just behind 753 is 752 which as a Railgrinder was purpose built in 1920 and would remain serviceable until the early years of the 21st century. It has now been preserved at the Heaton Park Tramway but is currently out of service. 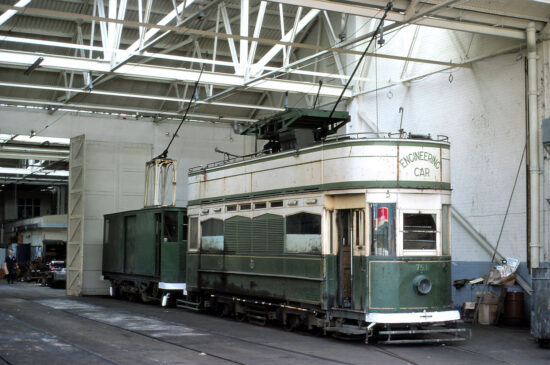