Around the World in Trams: San Francisco 1058

We take another trip to San Francisco’s historic F line for this latest look at trams from around the world.

We are taking a look at another of the PCCs running in September 1996 with this one numbered 1058 in the San Francisco fleet. Built by the St Louis Car Company for Philadelphia Transportation Company in 1948 it was numbered 2124 in that fleet and continued to run until 1992 when it was acquired for further use by Muni in San Francisco. It was subsequently restored back to service as no. 1058 in the San Francisco fleet and was another PCC to receive a “tribute” livery. Entering service with the advent of the “F” line in 1995 it received this Chicago livery although has subsequently received a different version of a Chicago livery. 1058 is currently out of service receiving repairs. 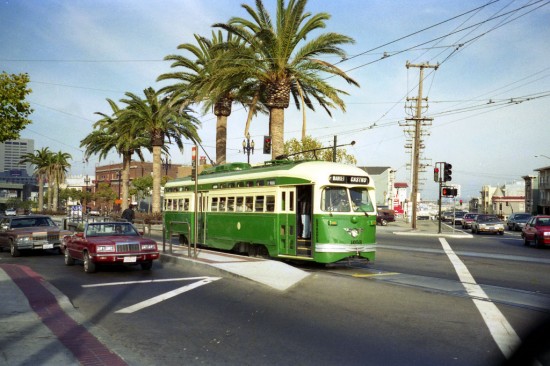