The last in this series of photos from Beamish in 1996 is featured in “Picture in Time” today with the ever-popular Blackpool 31 shown.

The high capacity of Blackpool 31 makes a very popular tram on a busy day at Beamish, although this does make it a very slow tram to load and unload with the sight of people struggling up and down the stairs an all too regular occurrence! 31 was built in 1901 and was initially a four wheeler before being rebuilt in 1918, becoming a bogie car in the process. It remained an open topper until 1928 when it received a top cover but was then converted for use by the engineering department in 1934. Eventually receiving the number 754 it remained in use for the best part of 50 years before heading to Beamish where work to restore it was soon underway. It returned to service in 1987 and has also returned to Blackpool on two separate occasions as well as a period at the Heaton Park Tramway in Manchester.

This photo shows 31 just arriving at Foulbridge on 16th August 1996. 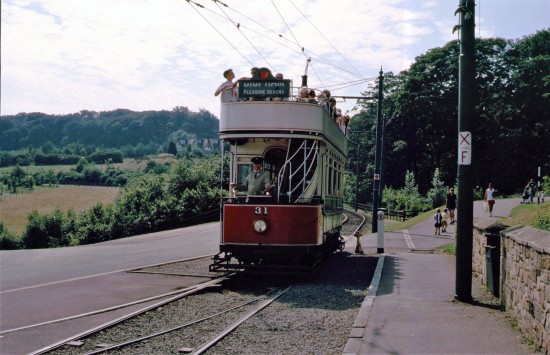