So Nearly, Not Quite: Blackpool Centenary 643

In this series of photos that didn’t go according to what had been planned when the decision was taken to press the shutter, this latest “dark” image possibly takes the prize of why did I bother! An incredibly dark livery and dark conditions combined with poor photography skills led to this “image”.

Trust us but this photo shows Centenary 643 at Bispham on 4th September 2006. Obviously, it is after the sun has set and the illuminations are on but despite that extra light it hasn’t helped this photo! 643 was in a mainly purple advert for Grosvenor Bingo which can just be made out in this image with the tram standing at the southbound stop as it prepares to head to Pleasure Beach. At least we can see the headlights! Aah, never mind, better luck next time! 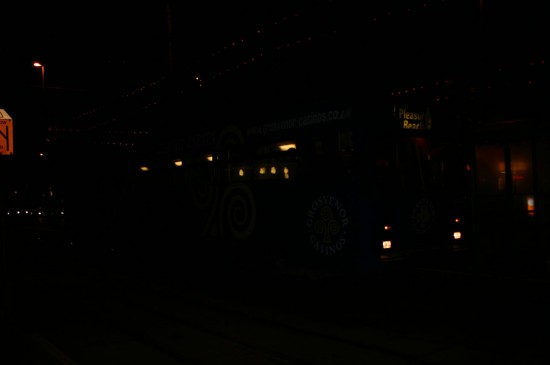