In Pictures: More battery trams getting ready ahead of extension opening – but still no official opening date

The full shadow running got underway from Sunday 1st December when the new timetable was introduced and has been continuing daily to make sure that everything on the extension is ready for the full service, as well as ensuring that the timetable can be adhered to. This has seen the return to operation of the Wolverhampton bound platform for the first time since September 2018. Interestingly some peak time services haven’t been running through to not only the extension but also Grand Central with them instead turning at Bull Street.

Wednesday 4th December also saw a test take place of a tram stopping and having to restart on the steep gradient on Pinfold Street leading to the Library. This saw 150 volunteers on board the tram to simulate if a tram has to do this in service. Once the tram stopped it was restarted continuing to the Library, hopefully proving that if this does happen it won’t be a problem for the trams in normal service.

On the battery tram front, 24 is the latest battery fitted tram to have entered service. Retaining the OLA adverts the tram has plain white battery covers on the roof instead of the West Midlands Metro blue as seen on the other trams. 24’s entry into service left just four to go (25, 26, 27 and 32) and a further two have been noted around the depot with the batteries fitted (also still with white covers). With 17 trams expected to be needed for the full service to Library this extra work has been necessary to ensure there are plenty of trams to operate the timetable. It is not yet known which the two trams with the batteries now fitted are.

With shadow running continuing and no major issues thought to have arisen yet we are just waiting for confirmation of when passenger services will begin – watch this space! 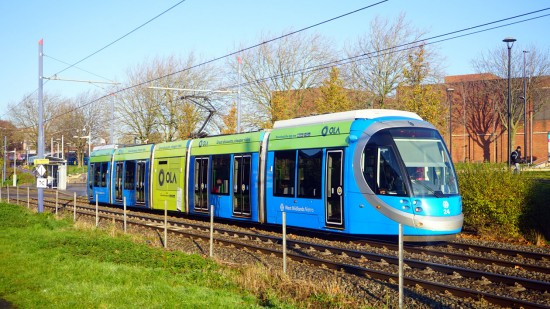 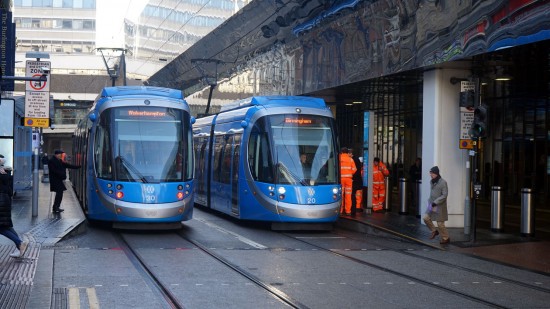 Both platforms back in use at Grand Central once more. 30 is about to set off for Wolverhampton St George’s as 20 gets ready to embark on a trip onto the extension. 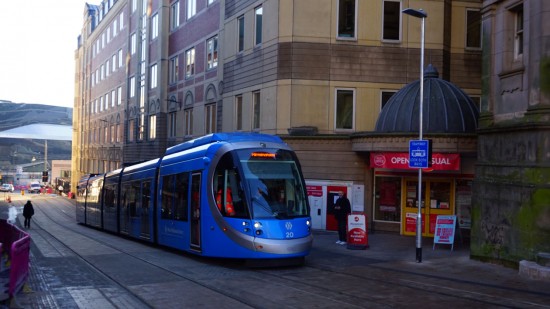 20 stops on the steep gradient along Pinfold Street as part of a special loaded test. 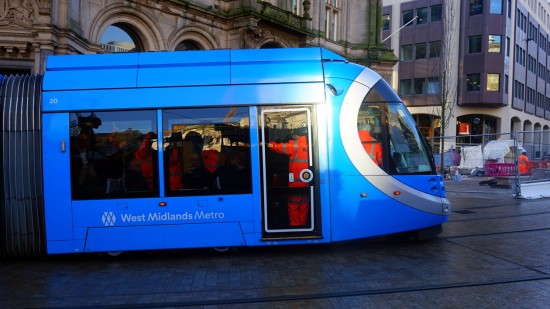 150 passengers on board 20 as it simulates restarting on the hill. (All Photographs by Andy Walters, 4th December 2019)