Marking 70 years since the end of trams in Leicester

Today (9th November) marks the 70th anniversary of the closure of Leicester Corporation Tramways, a network which at its peak ran for almost 23 miles around the East Midlands city. To mark the anniversary we take a brief look back at the history of the tramway as well as at some survivors.

As with many other towns and cities across the UK the system we ended up knowing as Leicester Corporation Tramways started off life as a company run system with the first horse trams running on Leicester Tramways – operated by the Leicester Tramways Co Ltd – on Christmas Eve 1874. This saw three single deck trams working a single route from the Clock Tower in the centre of the city north along Belgrave Gate, Belgrave Road and Loughborough Road to the Folly Inn in Belgrave which was located close to the original depot. Over the next 27 years the system continued to expand with Humberstone Road, London Road, Victoria Park Road, Knighton Drive, Aylestone Road, Grace Road and Uppingham Road all seeing trams running on by the turn of the century.

Official takeover of the network by Leicester Corporation came in 1901 at which time horse trams were still in operation but they soon started a programme of electrification and track relaying with the very first electric tram services following on 18th May 1904 with the Belgrave Road and London Road routes amongst those to first enjoy the modern advert of electric transport. At the same time as relaying existing routes new lines were also introduced with services now running to Highfields, Clarendon Park, Western Park and Narborough Road.

This wasn’t to be end of the expansion of the tramway and it reached its peak length in 1927 after a 12 year programme of extensions which saw lines open between Fosse Road and Braunstone Gate, Clarendon Road to the city centre via Welford Road, Groby Road to Belgrave Road and finally in 1927 from Humberstone Road to Coleman Road. When last section opened in March 1927 the system reached 22.74 miles and this was to be as big as it would become.

The first route closure came in 1933 with the route along Melbourne Road closed on 13th December but it was to be another five years before the next closure when the Coleman Road branch was shut in 1938 ahead of a closure in 1939 of the King Richard’s Road link. As could be seen across a lot of the country World War II saw a pause in the closure of lines but once hostilities were over the council resumed their policy of closure. 1947 saw the Aylestone and Fosse Road routes close before 1948 and 1949 saw the rest of the network fall by the wayside. The very last route to close on 9th November 1949 was the Humberstone Road route and with that nearly 75 years of tramway operation in the city was over.

Although details of the horse trams which operated on the tramway are not easy to come by it is widely mentioned that there were at least 46 trams which ran on the company tramway at times with 39 of these passing into the ownership of the corporation in 1901. Four more horse cars were purchased second hand from Nottingham by the corporation for use ahead of electrification.

In total there were 178 double deck electric tramcars which operated once the system had been electrified. This included the first batch of 59 open toppers built by ERTCW for 1904 with a further 40 trams following later in the same year. 1905 saw 21 balcony cars and 21 more open toppers built by UEC arrive in Leicester before the next new trams turned up in 1913. These were all balcony cars with ten from UEC and ten from Brush. The final new trams to be constructed included six balcony cars actually built in the corporation’s own workshops and 12 from UEC. The open top trams received top covers over the years as part of general fleet modernisation.

The most high-profile survivor is no. 76 which can today be seen as static exhibit at the Crich Tramway Village. This was one of the second batch of trams built by ERTCW in 1904 originally as an open topper but from 1913 was fitted with a top cover. It remained in service until withdrawal in 1947 when it was sold on for further use as a cricket pavilion and changing rooms in East Cowick, Yorkshire. Rescue came in 1960 when it was moved to Crich and it was the first tram to undergo a major structural restoration in the late 60s and early 70s. It operated at the museum from 1973 to 1975 but was then withdrawn and today is a static exhibit in the Great Exhibition Hall.

Another tram survivor is no. 31 which was purchased by Alice Silby in 1949 (along with four other lower decks only) to provide outbuildings at her farm in Markfield where it remained for 60 years (housing chickens and pigs!) until it was passed on to a new group who sought to restore the tram to its former a glory. A website was set-up to detail its restoration at https://www.leicestertrams.org.uk but sadly no updates seem to have been made since 2017.

Its not only some of the trams which have survived either as Stoneygate Tram Depot remains in situ and the Leicester Transport Heritage Trust signed a lease with Leicester City Council in 2013 with a view to conserve the building. This depot was built in 1904 but was only used until 1922 for this purpose and was even used a railway museum between 1968 and 1975.

The return of trams to Leicester?

Like so many cities in the country there have been plans for a tram network in recent years with the most recent plan being discussed by the Conservatives if they gained power in the local elections. At the time they only had one seat on the city council and the ruling Labour party said it was not a feasible plan and the plans now seem to have died down but in the future who knows trams may once again run on the street of Leicester some 70 years since they last did! 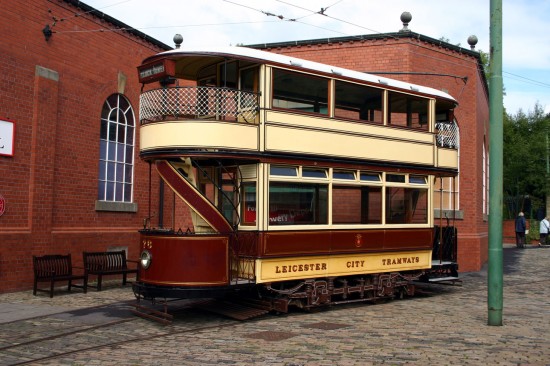 One of the last times 76 was seen outside for a public event was on 14th September 2013 when it was out in the Depot Yard for an enthusiasts event. (Photograph by Gareth Prior) 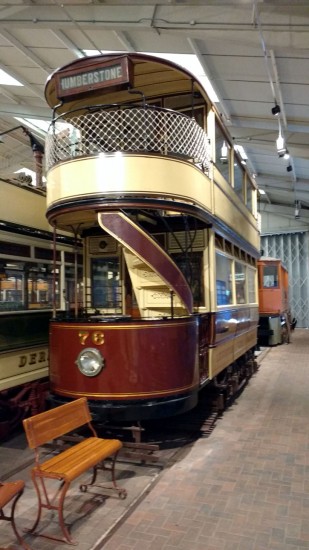 Leicester 76 as it is today in the Great Exhibition Hall at Crich. (Photograph by Geoff Pickles, 22nd September 2019)