In Pictures: 36 loses its adverts

It is still an ever changing scene on West Midlands Metro with livery changes seeming to be a constant occurrence and whilst there remains one tram, 19, which hasn’t yet gone fully blue this week has seen a livery change with 36 – which had been the first Urbos3 to feature external advertising – losing its My Metro App adverts.

36 was the very first tram to receive the “hybrid livery”, by which we mean losing its magenta with it replaced by blue but keeping the white and silver sections, in February 2019 when it also received the internal adverts for My Metro App. It retained this livery all the way up until late October 2019 when it went fully blue but at this point did retain the adverts. But this was pretty short lived as on 6th November it was seen in service – as a peak extra – minus the adverts but with the areas they covered retaining the old magenta (answering our query about whether they removed the adverts before adding the blue as they obviously didn’t!). Then it was another quick change as by 7th November it was in the full blue livery without any adverts.

On the battery tram front, 22 has still to enter service despite having had its batteries fitted for quite some time and the battery tram ranks will soon be joined by 34 which has been noted around the depot with batteries now in situ. 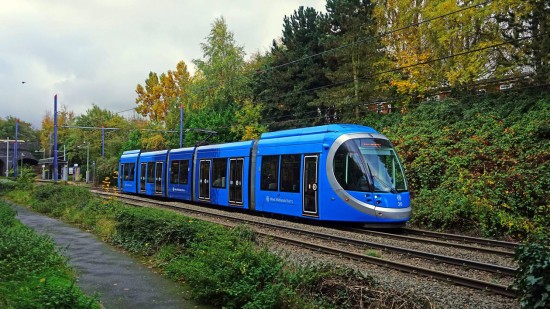