We head back another 12 years for this edition of Picture in Time as we take a look at a tram in Blackpool during 2007.

The tram in question this week is Jubilee 761 and we see it here at Central Pier heading to Starr Gate whilst it was carrying an all over advert for Manx2.com. This was the fourth (of five) adverts applied to this tram and would be carried by 761 between 2006 and 2008 (after removal it would receive an advert for Wynsors World of Shoes which is retained to this day as the tram is stored at Rigby Road). As for the tram it was the first One Person Operated double decker entering service in 1979 having been converted from Balloon 725. It would go on to remain in service until November 2011 when it was withdrawn having run on the last day of traditional tram operations. Originally preserved by the Fleetwood Heritage Leisure Trust it has since been returned to Rigby Road where it is now part of the Blackpool Heritage Fleet although awaits a chance to be restored to operational condition. 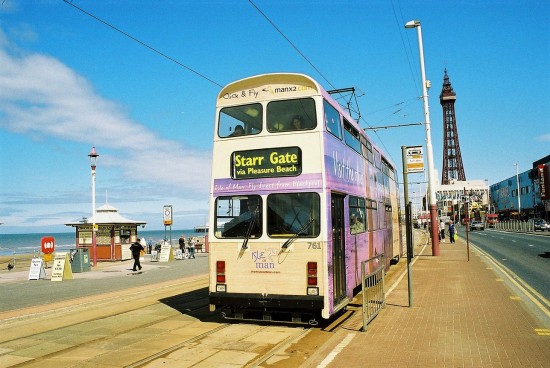