Call made for memorial to Burton tram tragedy

During the peak years of first generation tramways in the UK there were a number of accidents which saw people tragically lose their lives and now a call has made for one of these to be commemorated as the centenary of the incident approaches. On 8th October 1919 Burton & Ashby 19 lost traction on the track which caused the tram to head back down a hill and then derail and overturn. Two people tragically lost their lives, including the conductress on the tram, Lillian Parker and one passenger.

Its interesting to note that this accident was caused by the tram losing traction of the rails because of leaves on the line – proving its not just a modern phenomenon – and despite the best efforts of the driver on no. 19, Charles Insley, he was unable to apply the brakes. Lillian Parker had rushed from the top deck to the rear platform of the tram as it started to roll back down Bearwood Hill to attempt to apply the handbrake but this was also unable to stop the tram. When it reached the bottom of the hill it left the tracks and overturned. Passengers from the open top deck were thrown from the tram and Lillian had her leg trapped underneath the tram.

One passenger, Caroline Hughes, who was in the saloon of the tram, died on the day of the accident with Lillian Parker dying six days later.

Now 100 years later and a call has been made for a permanent memorial to be erected to commemorate this incident. It would be placed in the exact spot where the tram overturned featuring the two who lost their lives and a dove of peace. Original tram track removed from this area last year will also be included. 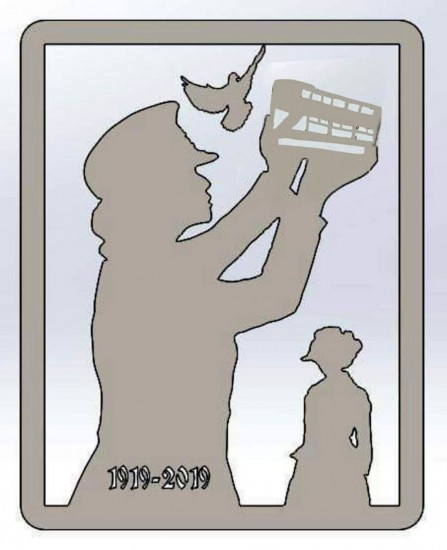 An artists impression of the memorial. (Image courtesy of Ian Siddals)

1 Response to Call made for memorial to Burton tram tragedy