13th July 2009 saw the delivery of the first of a new class of trams for Manchester Metrolink with Bombardier built M5000 3001 arriving at Queen’s Road Depot. At this time the M5000s were only been ordered to add to the T68 fleet but this decision was soon changed and they were to become the sole type of tram to operate on the network with 120 examples now in service in the city (and another 27 now on order).

3001 was constructed at Bombardier’s plant in Bautzen, Germany with construction having commenced in 2008. The first 74 of the trams were built with 52 seats (plus four perch seats) and they were all delivered in the base yellow and silver colours of the new house style for Manchester Metrolink (the spots were applied in-house at Queen’s Road as part of the commissioning process).

Back to 3001 itself and after it underwent initially commissioning it was used for press photos just two days later on 15th July when it was posed alongside fellow number ones – 1001 and 2001.

Now ten years on and 13th July 2019 saw 3001 celebrating its birthday allocated to the Altrincham to Piccadilly service. Happy Birthday! 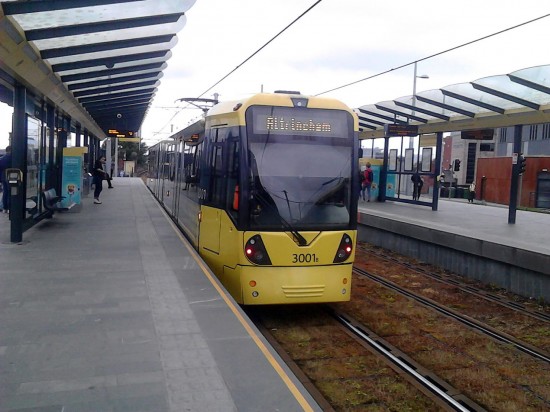 3001 at Deansgate-Castlefield on 13th July bound for Altrincham on the 10th anniversary of its delivery to Manchester. (Photograph by Reece Hughes)