Rare winter outings for a Balloon and a Standard

The first remotely significant snowfall in Blackpool this winter occured on Friday 18th January, and the fact that this co-incided with an unusual private charter resulted in two of the traditional fleet getting a rare winter outing. To see a heritage tram on the promenade in January was very unusual, but on this occasion it was little more than a side attraction as the other tram was much more unusual!

Blizzards on the morning of January 18th led to Balloon 701, one of two trams recently fitted with snowplough equipment, being sent out to clear the tracks in order to ensure that the service trams would continue to run unaffected. The car left Starr Gate depot (where it had been moved to earlier in the week) in the late morning and operated a full round trip, including a short layover at Fleetwood Ferry to allow service cars to pass. This was the first time that 701 had been able to run over the entire length of the tramway since September 2009, if not longer, and was also the first use of a plough car since March 2006, when 702 and 708 were both used in considerably worse conditions. This time round, 701‘s appearance was something of an over-reaction, as by lunchtime the weather was beginning to improve, and the fairly light dusting of snow on the promenade was starting to melt. Indeed, when the tram arrived in Fleetwood there was hardly any snow visible on the ground, making its presence in the town even more strange! However, it was undoubtedly pleasing that Blackpool Transport so quickly scrambled the tram into action, and this shows a determination to keep a tram service running through the worst of the winter weather with as little disruption as possible.

As if the surprise outing by car 701 wasn’t enough excitement for one day, later that afternoon Standard 147 also came out on a private hire! Full details are not known, but it is believed that the tram was being used for filming by the BBC, and actor and TV presenter Robson Greene was in attendance, along with Blackpool Transport’s own Bryan Lindop. The car was seen stabled on the passing loop at North Pier at around 4:00pm, by which time the snow had cleared, although the low temperatures meant that the driver of 147 must have been extremely cold! With this day also being the first chance to see the Flexity2 fleet operating in the snow, January 18th was certainly a memorable day for the Blackpool tramway and once again proved that the interest and variety on this system is far from gone. 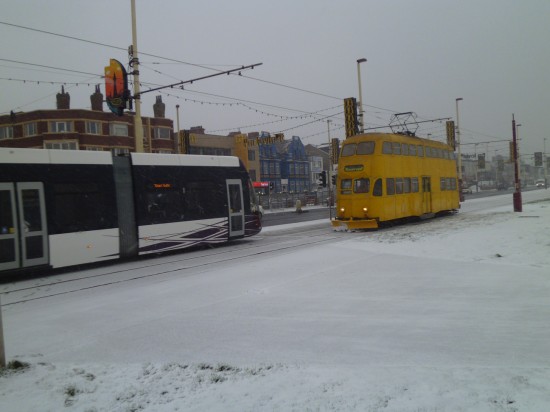 701 near to Waterloo Road heads north passing an unidentified Flexity on its way to Starr Gate. The need for a snow plough fitted tram to operate is more evident in this photo... (Photo: John Woodman) 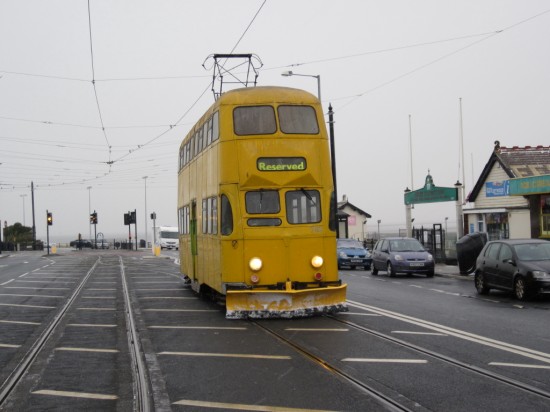 ...than in this shot taken at Fleetwood Ferry. 701 waits on the passing loop - a place it would have waited for passengers many times over the years - before heading back south to Blackpool. (Photo: Alan Taylor)