The new era for Midland Metro is here although from the outside there is currently no major change with all trams still running in the Network West Midlands Silver and Magenta livery as carried since the Urbos3 trams entered service. Branding has been updated at the stops and staff have new uniforms but for many passengers they probably aren’t even aware they are now travelling on West Midlands Metro!

As we reported last week as from Sunday 24th June services are now operated by Midland Metro Limited, a subsidiary of the West Midlands Combined Authority. All future profits from the operation will be ploughed directly into expanding the network – and the next few years will see major expansion as the system finally becomes one befitting the second city.

Fares have been reduced from the outset of the new contract and a new Metro only day ticket has been introduced. This has the aim of making travel more affordable with a view to increasing passenger numbers throughout the week.

Cllr Roger Lawrence, leader of City of Wolverhampton Council and WMCA transport portfolio holder, said: “This is a fantastic start from West Midlands Metro for passengers. Already they are seeing cheaper fares and new ticket products thanks to the flexibility and adaptability that delivering services through MML will provide. Services being provided by a WMCA owned company is an exciting new development in the story of the Metro, which is of fundamental importance to transport and the West Midlands economy. The tram network is a proven catalyst for economic growth and will be critical to best connect and feed into HS2 so we can reap the maximum economic benefits possible from the high speed rail line. The network is expanding massively over the next few years, generating millions of pounds which will be ploughed back into the tram system for the benefit of passengers and taxpayers.”

A full rebrand of the trams is expected in the near future and it would appear that a mainly blue livery is on the way judging by artists impressions included on both the new West Midlands Metro Twitter and Facebook pages. 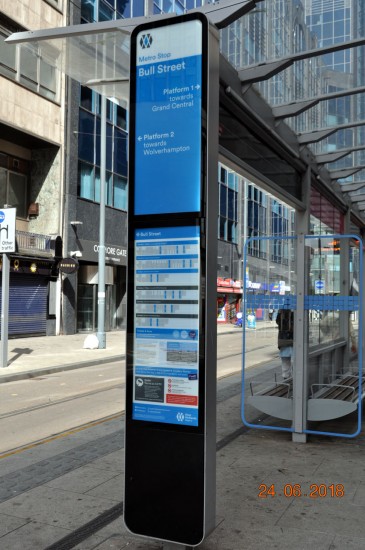 The new branding at Bull Street. (Photograph by Ken Jones)

* Further images from the start of West Midlands Metro will follow in a future update of British Trams Online.