Into Switzerland as we continue our world tour of trams with a visit to the system in Geneva. This line originally opened in 1862 and has had mixed fortunes over the years with it being reduced to just the one line by 1960, however, the last 20 years has seen more lines open once again. It is a metre gauge system.

We see 1801 here climbing into the Meyrin stop with a route 14 service to Stand. This tram is a Stadler Tango which was built in 2011. This shot is interesting because in the very far distance can be seen a tram at the outer terminus CERN which is just short of the border with France. The mountains in the background are the Jura range which are of course in France. This route was built in sections over the past five years and is also of note because unlike all the original routes the terminus is a stub end rather than a turning circle which means all new trams have doors on both sides rather than one side only. 1801 was caught on camera on 18th December 2011. 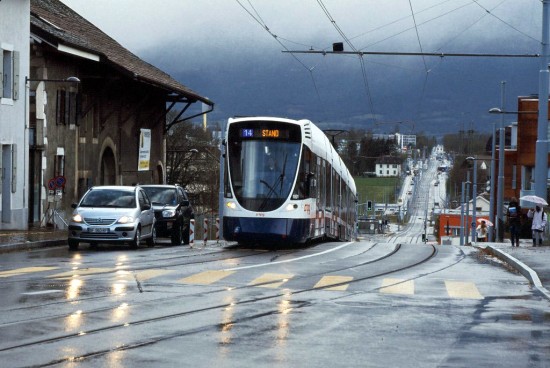