Posted on Saturday 9 September 2017 by Gareth Prior

At the end of traditional tram operation in many cities of the UK a number of trams were preserved and exported to the United States of America with the Seashore Trolley Museum in Maine becoming home to four trams – from Blackpool, Glasgow, Leeds/London and Liverpool. Of these we have recently seen that Blackpool Standard 144 is being worked on with a view to returning it to service but what of the other three? In this edition of our occasional Lost Trams series we take a look at one of only three Feltham trams still in existence – Leeds 526/London Transport 2085.

We last featured this tram in this series back in October 2012 with concerns then being expressed over its poor condition and how it would take a lot of effort – plus money – to bring it back into service. Sadly as the view below shows the situation hasn’t really changed with the tram still stored in one of the car barns at the Seashore Trolley Museum in a derelict condition. In fact it is fair to say that probably the only thing which has changed in the past five years is that there isn’t anything alongside the tram allowing for a clearer photo of 526/2085!

In 2012 the Leeds Transport Historical Society had estimated that over £700,000 would be needed to repatriate and restore the tram and with five more years having passed it is likely that this would now be a very conservative estimate. So unless there is a lottery winner out there who wants to see the tram back on the rails the situation is unlikely to change with Seashore having many other projects well ahead of the Feltham.

The other two UK trams at Seashore are Glasgow 1274 and Liverpool 293. There has been talk over the years of returning the Liverpool car to these shores but again nothing concrete has ever happened. As for the Glasgow car, with many other similar trams already in the UK the chances of this ever being repatriated seem even slimmer. 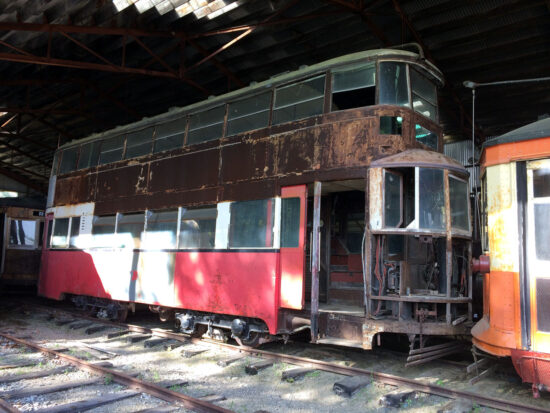 The Feltham sits forlornly in the car barn at Seashore on 7th September 2017. (Photograph by Andrew Hurd)