All change for Seaton from 18th September

Posted on Friday 8 September 2017 by Gareth Prior

It has now been confirmed that the old Victorian style terminus at Seaton will be used for the last time on Sunday 17th September with work to redevelop the site starting the following day. Tram services will continue until the end of October although for those starting their journeys at Seaton it will start with a shuttle bus to Riverside Depot where after a behind the scenes tour trams will continue through to Colyton.

The new £2 million terminus is described as state of the art and will be ideal for all year round use. Containing a small gift shop and café – the third café in the local area in addition to both Seaton Jurassic and Tesco – the new terminus is scheduled to open on 30th March 2018. It is hoped that the new look Seaton station will enable visitors to “immerse themselves in the fascination surrounding the history and operations of the tramway.” The new design is said to focus on the unique heritage of the Tramway.

But that is the future with the remainder of 2017 seeing a special timetabled service run between Riverside Depot and Colyton. As previously reported the standard ticket price will include a behind the scenes tour at the depot providing insights into the daily working of the depot, a closer look at the plans for the new Seaton Station and development of the Heritage Lottery project “Travels through Heritage and The Axe Valley”.

Visitors to the tramway are being encouraged to start their journeys at Colyton during the work although anyone who wants to start their day at Seaton a shuttle service will be provided from the old terminus to Riverside between 18th October and 29th October and throughout December. There will no ticket office here with all tickets having to be purchased at the temporary Riverside Depot mobile ticket office. 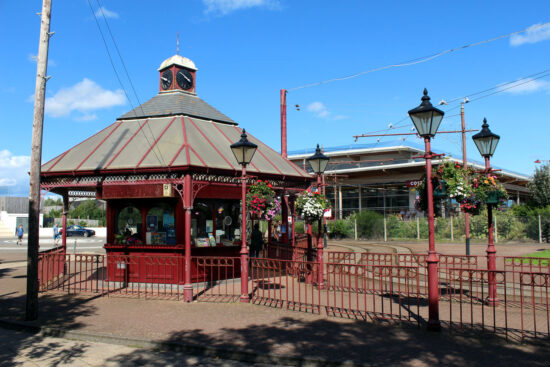 A view of the Seaton terminus on 5th August 2017. The terminus as you know it will close on 17th September with redevelopment work due to start the following day. (Photograph by Gareth Prior)