Posted on Thursday 20 April 2017 by Gareth Prior

It is that time of the week again as we head off to Blackpool for another image from the archives as part of the Picture in Time series. This time we feature two Balloon Cars back in 2006.

The date is 3rd September 2006 and the location is the old three track layout at Tower as Balloon Car 703 passes 710 during the morning. At this time 703 was carrying the popular 1980s Green and Cream livery and is operating a service through to Cleveleys as it stops to let passengers off and there does appear to be plenty of “room on top” for anyone wishing to travel through to Cleveleys. Meanwhile 710 is on the centre track, presumably waiting to operate a southbound service to Pleasure Beach – although the destination blind doesn’t seem to have been changed just yet. 710 is in one of the Metro Coastlines liveries – one of two trams to carry this Magenta and Yellow version, the other being 713 – a livery that is still carries today in storage at Wyre Dock. As for 703 this tram recently returned to Blackpool from Beamish and can currently be found in disguise as Sunderland 101 stored at Rigby Road. 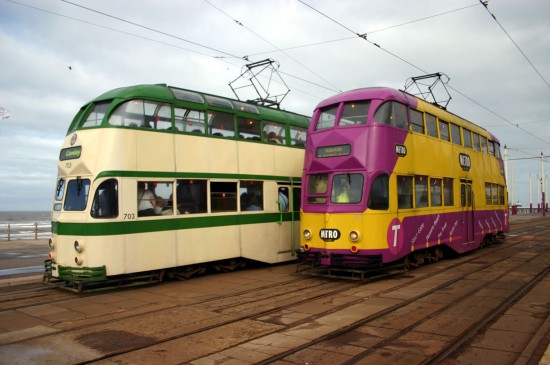