The August Bank Holiday weekend saw the latest period of intensive operation for Blackpool’s heritage tram tours which was largely blessed with fine weather. This slightly belated report summarises the events of the long weekend, including which trams ran on each day, starting with the now established Friday evening ‘warm-up’ event.

The weekend’s excitement got started on Friday 26th August with a special tour featuring both of the serviceable illuminated trams: Western Train 733+734 and Frigate 736. Both trams ran in convoy to Fleetwood twice, once in the late afternoon sunshine and then again after darkness fell providing the novel sight of two feature cars at the Ferry. On both trips the duo were posed side by side on the passing loop at the terminus, before heading back south. Earlier in the day, the normal two-car heritage service had been worked by Boats 227 and 600, reflecting the glorious sunny weather.

The weekend proper kicked off with fine weather on Saturday morning allowing the use of two Boat cars, with 600 joining the six timetabled heritage trams as a special due to the availability of an additional crew. Twin set 272+T2 suffered a minor fault during the day and was replaced by 675+685; otherwise all the advertised cars ran as planned.

Sunday 26th was slightly marred by an accident involving Flexity 014 and a pedestrian at Cleveleys during the morning which disrupted the service and caused Ex-Towing car 680 to miss its scheduled run to Fleetwood. The day was also notable for car 718’s first use since its evening re-launch tour one month earlier. Note that this car has had new external fleet numbers applied, those on the side panels replacing some small bits of paper stuck to the centre doors which it carried on its last outing! This day was easily the worst for the weather, although by the afternoon the sun was shining again, but fears over the forecast were sufficient to confine all of the open cars to the depot.

An unexpected treat occurred on Monday when B Fleet Balloon car 700 was used on specials, operating in ordinary service picking up and dropping off passengers at the LRT stops. The tram was unusually parked on the turning circle at Starr Gate for the duration of its crew lunch break, adding further novelty value to its appearance, but otherwise ran between Pleasure Beach and Little Bispham. Balloons 701 and 723 both developed minor faults during the day; the former was soon repaired but 723 was swapped over for Boat car 227 due to the fine weather.

An additional event took place on the evening of Tuesday 28th August, the now annual ‘Ride the Lights’ night offering a preview of the illuminations when the promenade road is closed to all traffic except for trams and bicycles. As an experiment, the Train and Frigate were both used on the familiar circular tours between Pleasure Beach and Little Bispham – but in a break from tradition, passengers were able to board at any of the heritage stops at Pleasure Beach, North Pier/Tower, Cabin and Bispham. A detailed timetable was published although unfortunately this proved impossible to meet due to an incident on the tramway early in the evening which caused considerable disruption to the advertised service. Discounted fares were offered on this evening with further reductions available to local residents, helping to tempt even more people to take a ride on one of these Blackpool icons.

As a whole the August Bank Holiday weekend was a great success with healthy loadings on the heritage trams and an interesting turnout. However, the next heritage event should be even better: the much-anticipated anniversary weekend on 24th & 25th September should see every operational tram in use, with static tram displays, depot tours and much more to be enjoyed.

The following trams were used on heritage tours over the course of the weekend: 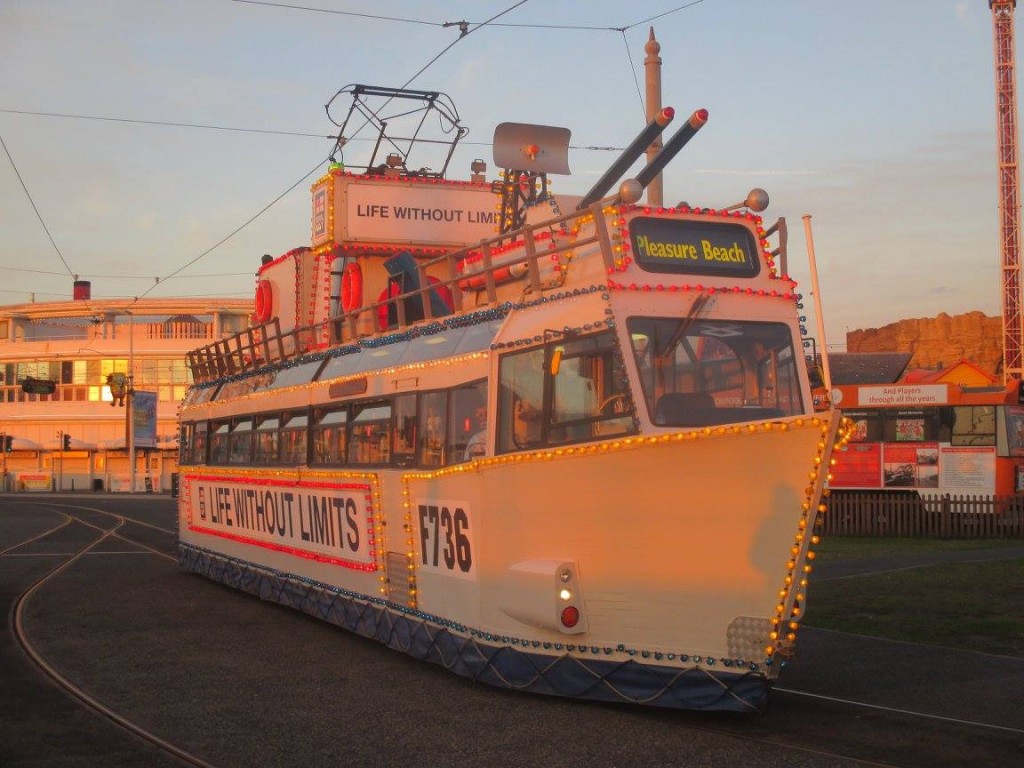 The early evening sun gleams off the side of 'HMS Blackpool' 736 as it stands at Pleasure Beach on 26th August. 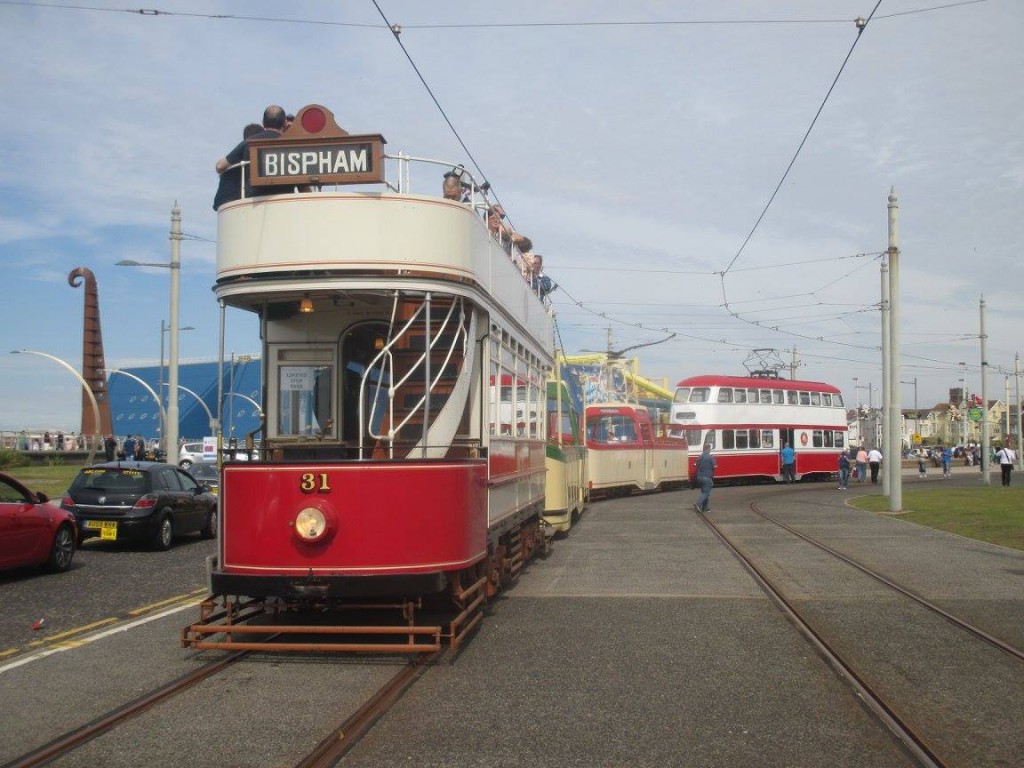 The same location a day later, and a splendid line-up of trams including red liveried Marton Box 31, Boat 227 and Balloon 701. The uniform look is slightly spoiled by Boat 600, seen immediately behind 31. 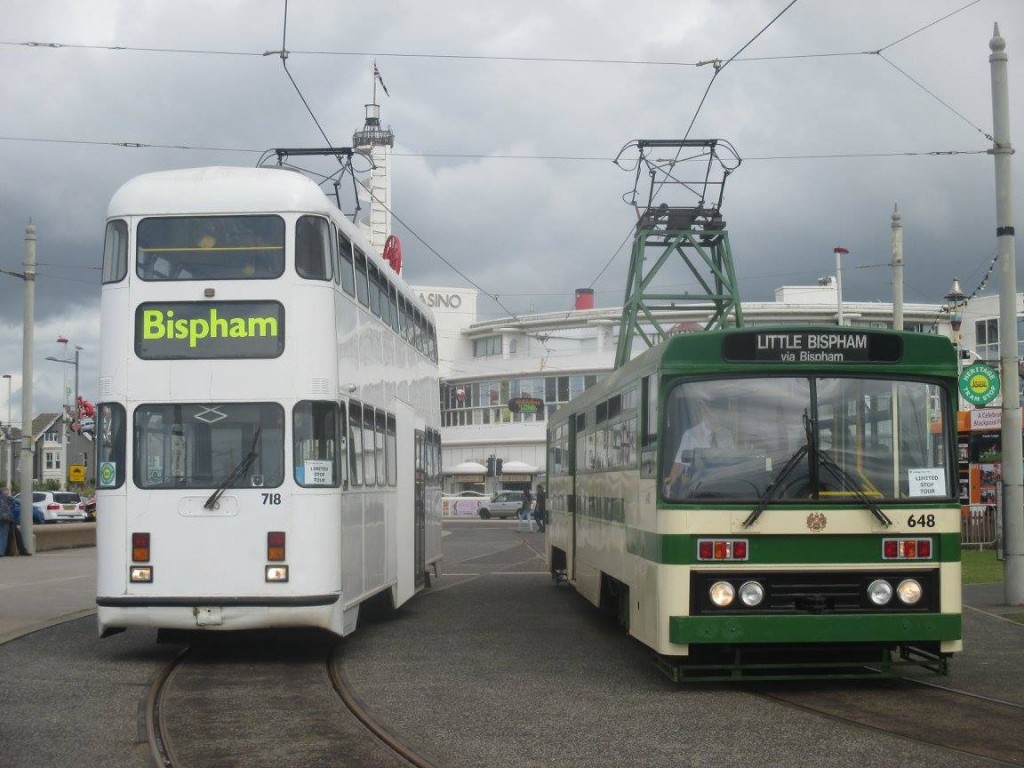 Pleasure Beach is again the port of call for the image from Sunday 28th August, with 'white blob' 718 alongside Centenary car 648, representing more recent but still historic fleet developments prior to the tramway upgrade. 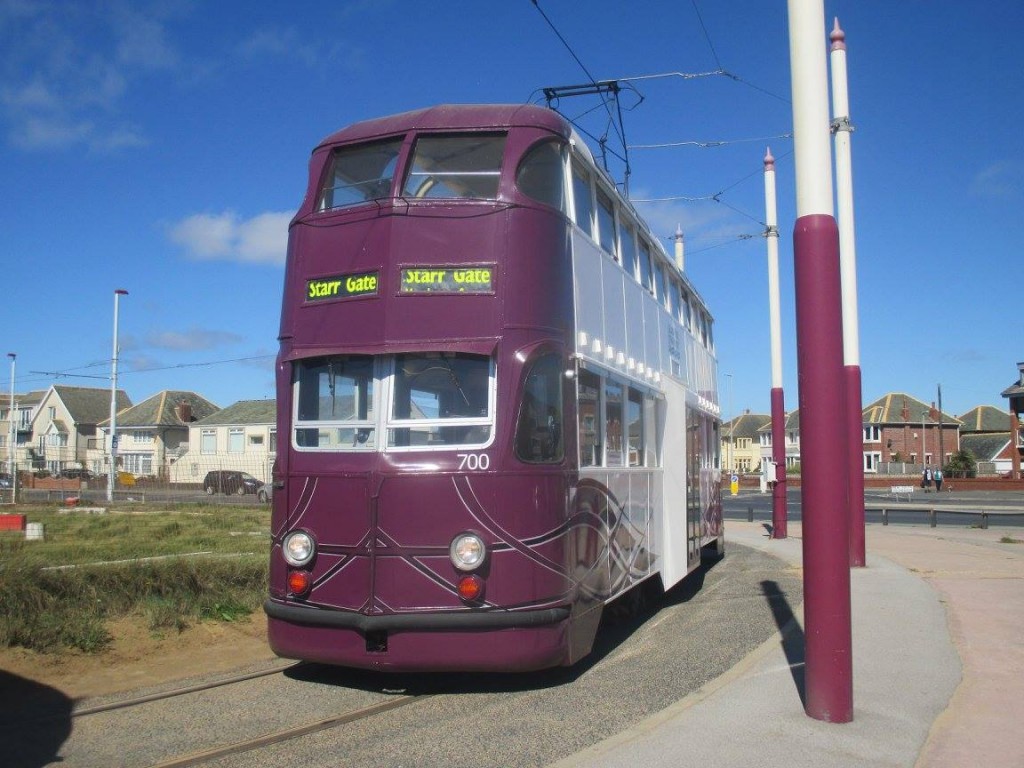 Although not actually part of the day's heritage output, Balloon 700 arguably stole the show on Bank Holiday Monday. Here the tram is shown at Starr Gate where it was parked for a crew lunch break. (All photos by Rob Bray)