Brush Railcoach 634 will return to Blackpool!

The Blackpool Heritage Trust have announced that preserved Blackpool Brush Railcoach 634 will shortly be coming home, after its owner very generously agreed to donate the tram to the Trust. 634 was amongst the first trams to depart on the eve of the tramway upgrade, and was not expected to return – but the fact that this is now happening is yet another reminder of how far the heritage operation has progressed since then!

With the tramway upgrade and disposal of many of the old fleet looming, transport enthusiast Andy Ashton bought 634 in 2009 and arranged for it to be transported to a museum site at Rushden, Northamptonshire. Despite being stored outside, Andy carried out a great deal of work, with some help from his young daughters and a few friends, on the car – which had been inactive since 2004 – including weatherproofing to protect it from the elements, and a stunning repaint in the 1990s style green and cream livery with black window surrounds. More significant was the amount of renovation work carried out interally, which included the painstaking uncovering of much interior woodwork which was then carefully varnished. The plastic panels were discarded in favour of some more sympathetic materials whilst the green cant rail glasses were uncovered after being hidden behind formica panelling for many years. Although their reappearance is not strictly appropriate for a tram in such a modern paint scheme, they look so nice that it is hard to mind, especially as they cannot be seen in any other Brush car (yet!).

634 moved to the North East Land, Sea & Air Museum in 2014 where the work continued, however more recently negotiations have been taking place to return the tram to its home system. Rather than retain ownership of his treasured vehicle, Andy has kindly agreed to donate it to the Blackpool Heritage Trust so that it can run again on its native tramway and be enjoyed by a much bigger audience. The tram is expected to make the journey back to Rigby Road in the next few weeks, and can then be assessed to determine the level of work required to get it running for the first time in over a decade.

It should be stressed that, with a very full workshop programme for the year ahead, 634 is not expected to operate this year but as it remains in such good condition it shouldn’t be too long before this smart Brush car is able to return to the promenade as a permanent member of the heritage fleet. Hopefully it can be relaunched in 2017, perhaps as part of a celebration to mark the 80th anniversary of the Blackpool Brush cars? In the meantime, it will be excellent to see another popular tram back in Blackpool and no doubt there will be some opportunities to see it during 2016. Grateful thanks must go to Andy Ashton for not only ensuring 634‘s survival, but for undertaking such a good quality cosmetic restoration to enable this deal to be considered, and lastly for making it available to the new Trust at no cost. 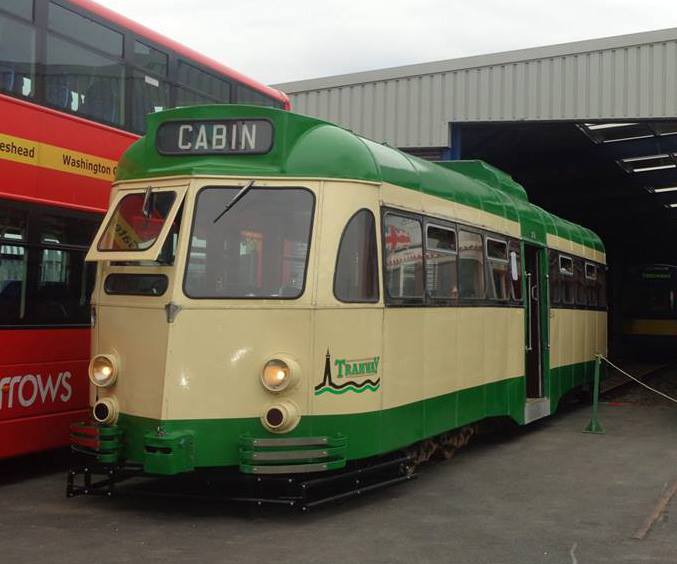 634 is seen at the NELSAM site during a rare airing, showing off its attractive 1990s style livery complete with green skirt and Blackpool Transport logo transfers. (Photo by Bradley Jones)

9 Responses to Brush Railcoach 634 will return to Blackpool!