A trio of Balloon car treats

For any readers who are getting bored of reading about how the Blackpool tramway continues to surprise and delight us in the modern age and why we love this system so much – this article might be one to skip! Wednesday 21st October was yet another example of a non-event day in Blackpool when traditional trams provided some treats for enthusiasts and members of the public alike, proving yet again that the upgrade has failed to remove the ability of the tramway to throw up many unexpected highlights.

As has been mentioned before, members of the ‘B Fleet’ are now seeing daily use on specials and this day was no exception with both 700 and 719 in action. 700‘s duty began with the car reversing at Foxhall on leaving the depot, and it then headed directly to Starr Gate. This was followed by a full length run to Fleetwood, still quite a rarity for the modified Balloon cars. On arrival in Fleetwood, 700 actually unloaded passengers at Victoria Street as the platform at the Ferry stop was already occupied by a Flexity tram, which was staying put for its allocated stack time. Once the path was clear the Balloon then moved forwards and passengers were allowed to board for the trip back into Blackpool. Later on, 719 also made a run through to Fleetwood although this time the stop was unobstructed allowing it to terminate on Bold Street as normal. This was only thought to be this tram’s second visit to the Ferry in normal passenger service in its current guise, and as the first had ended in failure with an empty run back to the depot, this may well have been the first time it ran to and from Fleetwood in service as a member of the ‘B Fleet’.

However, the biggest highlight of the day came after the fall of darkness when car 723 operated an illumination tour! Having been reinstated to traffic in its shabby 1980s green and cream livery following the removal of its advertising vinyls as an extra attraction for the recent 130th anniversary weekend event, 723 was not expected to see any further use this season but was surprisingly chosen for tour duty on this night. It is not known when this car last worked a tour of illuminations – certainly, being a modernised Balloon car it would have not been a favoured car for such a role since its last overhaul in 1993 – and it could well be more than twenty years since this last happened. All in all, another remarkable working and yet again, proof that even with a fleet of modern low-floor tramcars, Blackpool is still anything but predictable! 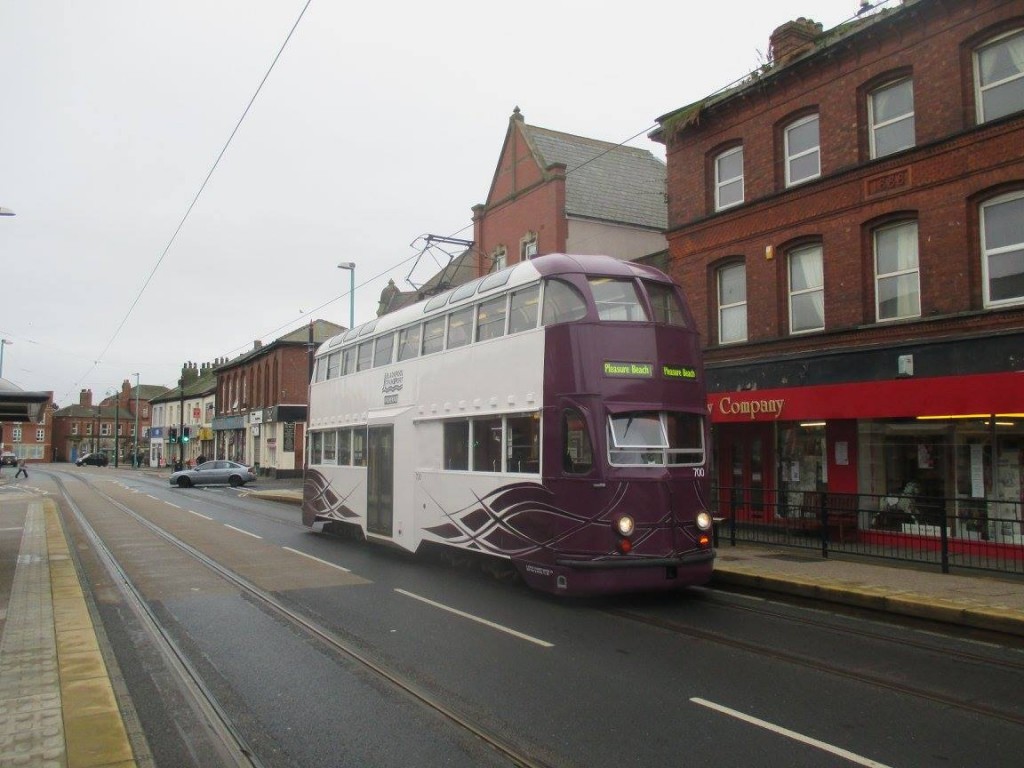 A novel scene with modified Balloon car 700 unloading its passengers at Victoria Street on 21st October so they did not have to wait for the Flexity in front to move out of the way. (Photo by Rob Bray)