The Mayor of London Boris Johnson was in Croydon on Monday 25th June to
officially launch the new Line 4 service between Therapia Lane and Elmers End
with new Variotram 2554 also present in a vinyl wrap livery for Croydon. Although the service was officially launched on this day a shadow public service had been in operation for several days preceding to ensure that everything went smoothly on the day.

The new line 4 will operate four trams per hour between Therapia Lane and Elmers End from approximately 0630 to 1900 on weekdays with a slightly later start and finish time on Saturdays. There will be no line 4 on Sundays. The new service has been introduced to help increase capacity on the Tramlink network which has been a long held ambition due to the popularity of the tramway. Although much of the capacity increase is actually needed further onto the Wimbledon branch this is the best option at the current time as it has needed limited infrastructure improvements.

The main infrastructure improvement which has been needed to enable this service to
operate was at Elmers End where the former cripple siding has been converted into a new passing loop. Previously the short section of line from Arena to Elmers End was  completely single track which would have caused problems with extra trams running through to the terminus but this has now been alleviated slightly with the new passing loop. When the Elmers End branch was closed to trams during June it was initially believed that the whole section would have been doubled but it would appear that this was not possible and as such the network will have to do with a passing loop. For the record the passing loop was first used in service just after midnight on Sunday 17th June, a slightly
earlier than planned opening.

As mentioned above although the official launch of line 4 was not until Monday 25th June, Tramlink had been running a shadow public service for several days at the end of the previous week to check that everything was in order before the local media and the Mayor of London were invited to see the increase in capacity for themselves. During this shadow running the drivers were making special announcements to inform passengers that the service did not run around the Croydon loop (previously all services from Elmers End and Beckenham Junction ran round the loop whereas line 4 runs onto the Wimbledon line at Reeves Corner).

The launch of line 4 has also seen the timetables for all routes slightly amended. As previously mentioned on British Trams Online the new Variotrams were struggling to keep to the current timetables and this has now been put down the acceleration rate and braking rate being far slower than that of the original Bombardier trams. These rates are completely computer controlled and so the drivers have absolutely no control in improving
them. On acceleration when the driver puts the traction controller into drive, the tram goes at its own pace until the driver takes the power off at the required speed whereas with the Bombardier trams the driver can vary the speed due to conditions and loadings up to a preset rate. Similarly the driver has to brake earlier to get the speed reduction to the required level to stop, this also affects driving on the road sections where the driver needs to travel slower to ensure there is enough time to stop in traffic.

As a result of these issues with the Variotrams the travelling time between termini on all routes has been increased. Longer five minute layover times are to be provided at termini to help recover any lost time and 14 rather than 13 trams will be in use on line 3 between Wimbledon and New Addington. Speed limits have also been reduced around curves for the new trams as they have fixed bogies and these are also being applied to the Bombardier trams.

The launch of the new Line 4 coincided with the unveiling of Variotram 2554 in a new vinyl wrap livery for Croydon. This has been applied to the tram as part of the funding to purchase these extra six trams for the network came from Croydon Council. The livery
carried by this tram is very difficult to describe but features purple as its
base colour.

Boris Johnson, Mayor of London, said: “These superb new tram services are essential to Croydon’s long term prosperity, which in turn feeds into the Capital’s economic success. Fast and efficient transport links not only make Croydon a more convenient place to live and work, but also attract businesses that will deliver much-needed jobs and economic
growth putting Croydon firmly on track for the future.”

Cllr Mike Fisher, Leader of Croydon Council, added: “These fantastic new trams are a major boost for a transport network that is the envy of London and the rest of the country and they will provide an even better service for people who live and work here. We have invested £3m into this project to help boost local infrastructure – and it’s further evidence of our commitment to the regeneration of our borough. This year promises to be the beginning of an exciting period of delivery that will transform the way our town looks and operates – and that will service Croydon well for generations to come.” 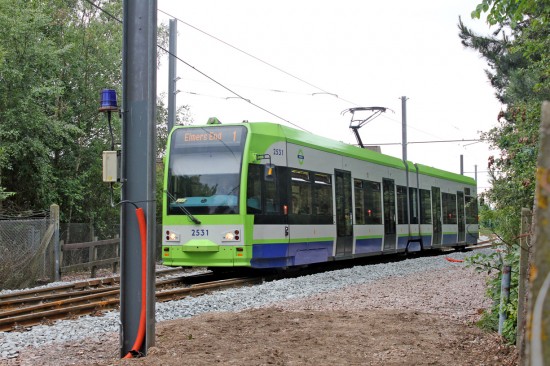 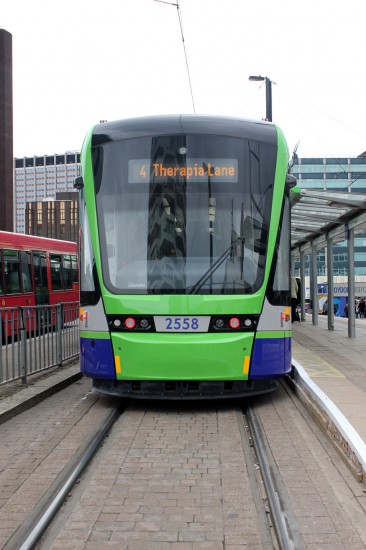 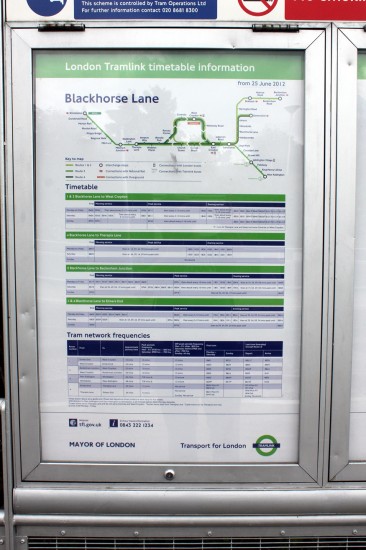 A view of the revised timetable at Blackhorse Lane. (Photo: Ian Buck)