Progress on a thorough overhaul of Beamish 196, the ex-Oporto four wheel tramcar resident at Beamish Museum, is making good progress. The car has spent almost a whole year out of service but the wait for its return will certainly be worthwhile, as it is receiving its most extensive workshop attention since making its passenger debut in the UK in 1992. As reported previously, 196 will be outshopped in a South Shields inspired blue livery on completion of this work, replacing the previous maroon and cream Gateshead colours.

The tram has recently been reunited with its truck which has been overhauled over the past few months, and this will allow it to be shunted around the depot area much more easily, which should be a welcome relief to the Beamish staff and volunteers. Work has now resumed on the body, with various beading being removed. This has revealed the basic frame to be in a generally good condition, although one corner pillar has deteriorated badly and some of the woodwork in this area will need to be replaced. Another noticeable development has been the removal of all saloon windows for attention. Like larger Oporto car 273 at Crich, 196 previously had sliding windows which could be moved into the body panels on warm days, but these have proved unreliable in recent years. Now it is hoped that, following overhaul, they will be fully functional again soon which will no doubt make this tram much more attractive to visitors in fine weather.

It had been hoped that 196 would be ready for service in time for Beamish’s next major transport event, ‘Power from the Past’, but with only two months left this may be a tight deadline to meet. However, bearing in mind the incredibly swift progress made on Blackpool ‘Boat’ 233 earlier this year, an appearance at the event by 196 certainly cannot be ruled out… watch this space!!!

In other news, the aformentioned Blackpool 233 has now received chrome fleet numbers on its central roof canopy, further enhancing the amazing work carried out on this tram. Repainting of the interior will probably now have to wait until next winter to ensure high availability of the tram fleet during the peak summer season. Meanwhile, the Museum will soon be made aware of whether another more local tram will be joining their fleet. At their Annual General Meeting in July, members of the Tramway Museum Society will vote on a special resolution proposing to release the remains of Gateshead 52 from the national collection to a new home at Beamish. Having languished in storage for many years, this would potentially be great news for 52 as it is more likely to be restored at Beamish than it is if it remains in Derbyshire, having been part of the TMS fleet since 1960 and never run during this time. 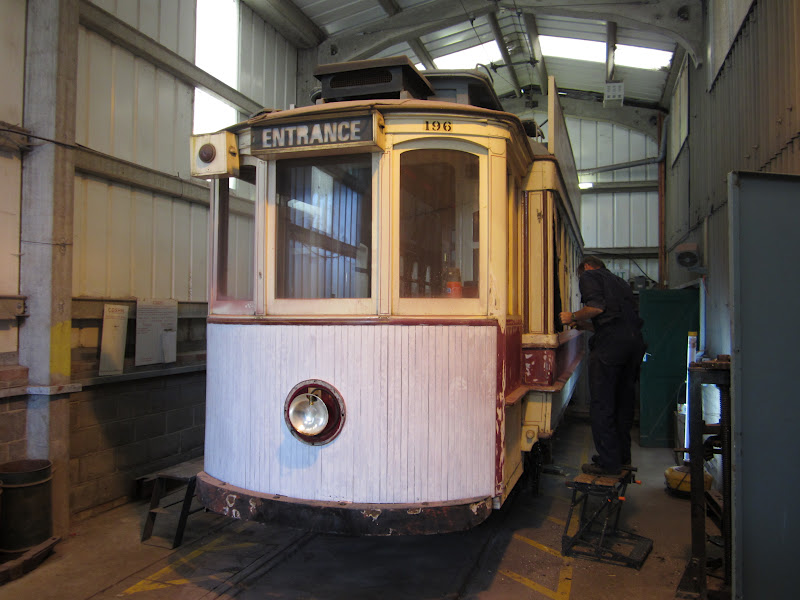 Newly reunited with its refurbished truck, 196 is seen here in the lean-to shed at Beamish with its dash panel already in undercoat and side panels being removed. (Photo courtesy of the Beamish Transport & Industry Blog) 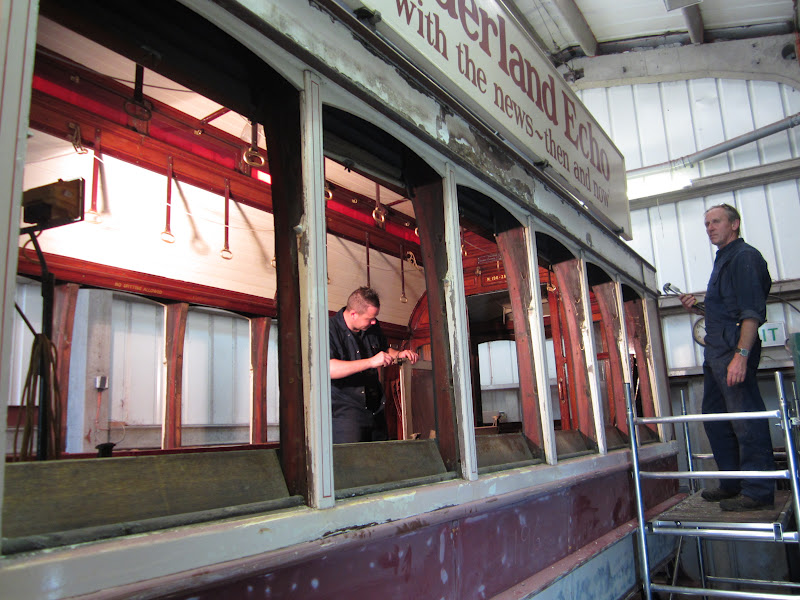 Seen on the afternoon of June 26th, 196 has now been stripped of its sliding saloon windows as work progresses. (Photo courtesy of the Beamish Transport & Industry blog)