We are back in the middle of the Irish Sea for today’s Picture in Time image but this time we move away from electricity and feature the Douglas Horse Tramway on a wet day in 1992 with a view at the Strathallan terminus with the usual collection of trams in attendance.

Three trams are at the forefront of this photo (although there are another three horse cars and two MER trams also just about visible) with two GF Milnes cars of 1896 on the left – nos. 34 and 33 – and on the right is the newest tram in the Douglas fleet – yes that’s right no. 1 is actually the newest tram! The horse – before they carried name tags so we can’t identify the horse unfortunately – is just being attached to no. 1 before it departs with a service along the middle of Douglas Promenade to the Sea Terminal. Judging by the weather this is a sensible choice as all other trams present seem to open sided at the very least including nos. 34 and 33 which both carry extensive advertising with the former trying to make us all hungry with adverts for Golden Wonder crisps. Behind the trams is the now long gone Summerland entertainment complex with the car park pretty full as on a day like this it is probably best to be enjoying some activity which is undercover. The date of the photo is 26th August 1992. 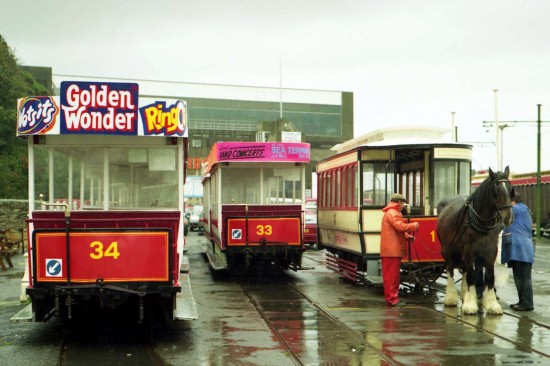 This entry was posted in Douglas Bay Horse Tramway, Picture in Time. Bookmark the permalink.