The annual Fleetwood Festival of Transport, held on Sunday 19th July 2015, provided the incentive for the most extensive service operated by traditional trams to Fleetwood – albeit turning short at Fisherman’s Walk – since the Blackpool tramway upgrade. Six heritage trams operated a twenty minute frequency between Pleasure Beach and Fisherman’s Walk throughout the day, and in addition a further three vintage trams spent the day as static exhibits on Pharos Street.

The day began with an unusually early start for three heritage trams which were to be stabled on Pharos Street as part of the festival itself. The chosen three were Fleetwood Box 40, Bolton 66 and Balloon 715, the latter being a particularly appropriate choice due to its adverts for the event. Flexity 016 was also stabled near to the Fleetwood terminus, on the Bold Street loading platform to showcase its all-over advert livery for event sponsor Freeport. Combined with the six cars which were scheduled to run in passenger service throughout the day, this meant that the number of historic trams in attendance equaled the previous all-time record for the festival, set at the inagural event in 1985.

Unfortunately whilst Blackpool Transport made a considerable effort to provide a healthy tram presence at the event commonly known as Tram Sunday, the weather was somewhat less generous with cool temperatures, although at least it stayed dry and there were even some bursts of sunshine across the day. This meant that the day started with enclosed cars chosen to work the timetabled heritage service, and the six were Standard 147, Brush car 631, Centenary car 648 and a trio of Balloons – 700, 701 and 717. The latter was a last minute substitution for Twin set 272+T2 which failed before leaving the depot, whilst 147 was another early casualty and after a brief stint of use it was returned to the depot for attention with Boat 230 taking its place. This offered the chance of an open top ride despite the cold, presumably because there were not exactly a lot of suitable covered cars left to choose from! The Boat was probably the least popular car of the day, and it was notable that despite the fact that the majority of passengers on the heritage service appeared to be the general public rather than hardcore enthusiasts, the likes of 648 and 700 proved extremely popular. It really does seem that the novelty value of any of the old tram fleet is being appreciated by locals and visitors alike to an extent not previously seen, and as a result the day was blessed with heavy loadings and no doubt plenty of well-deserved revenue for the heritage operation.

As the afternoon drew to a close and the festival was wound down, events concluded with cars 40 and 66 running back from Pharos Street to Rigby Road with passengers invited to ride on this trip for a special £5 flat fare, with those on board unusually permitted to stay on until Hopton Road was reached. The last of the event’s star attractions to head back south however was 715 which ran back empty, whilst Flexity 016 was pressed into normal service once its role at the festival was over. However, further excitement came the following day when as an unexpected bonus, B Fleet Balloon car 700 was used on specials, operating as a normal service tram and utilising the platforms as intended when this tram was converted with widened centre entrance area. Hopefully this bodes well for more regular use of the modified Balloons this summer, but even a one-off appearance should be considered a positive step in the right direction.

Whilst the Tram Sunday event, now rightly known as the Fleetwood Festival of Transport, has lost a lot of its sparkle in recent years it cannot be disputed that it remains a popular day out for many people and it is extremely satisfying that, despite being banished from the actual event site due to safety concerns since 2000, the heritage trams have now found a worthy role to perform at it. Those who attended have suggested this may have been one of the best heritage running days of the year so far, and it was also proven that a frequent timetabled heritage service to Fleetwood can work – this being helped by the crews of the static trams providing lunch cover on this occasion. Hopefully a precedent has now been set and future festivals will enjoy a similar level of tram action, possibly starting a whole new era for Tram Sunday and making this a highlight of the tramway calendar, just like it was when it first began as a primarily tram event thirty years ago. 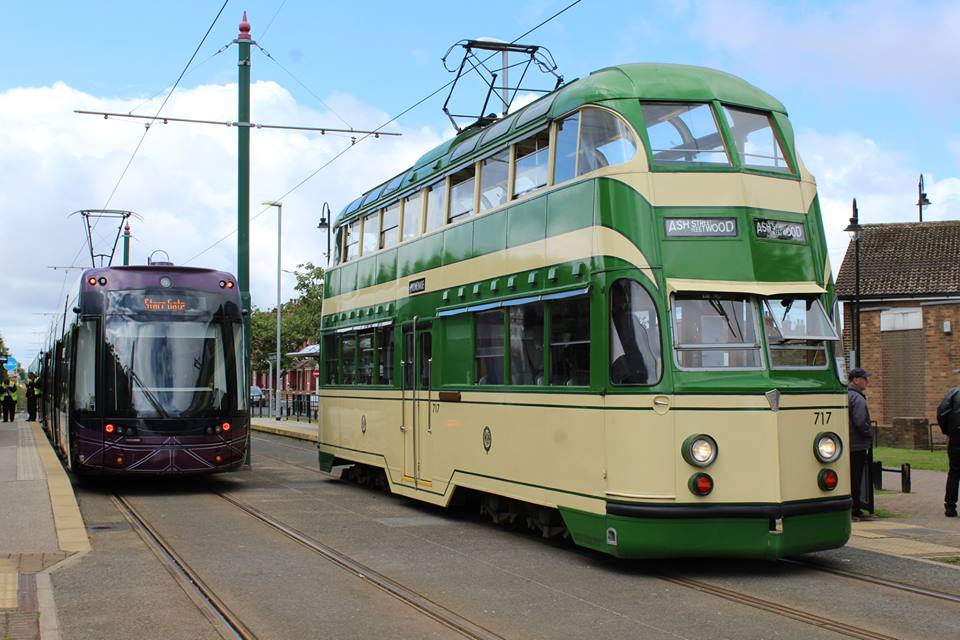 The first heritage tour of the day to reach Fleetwood utilised car 717 which also conveyed the various dignitaries attending the opening ceremony. Here it is seen on arrival with a service tram alongside preparing to return south. 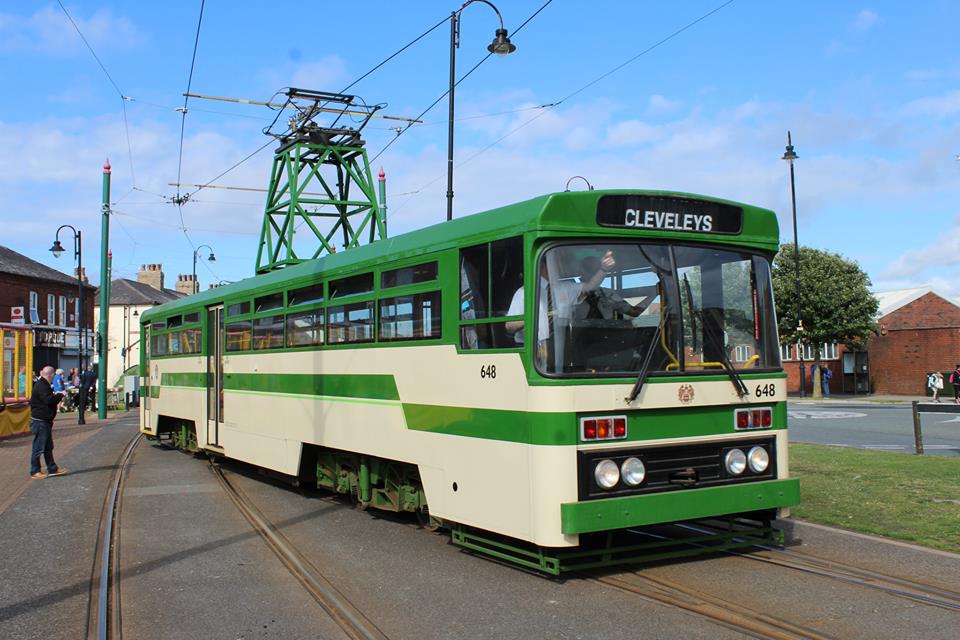 Centenary car 648 reverses on the Ash Street crossover before returning to Blackpool in spite of whats its destination states (it was being changed at the time!). 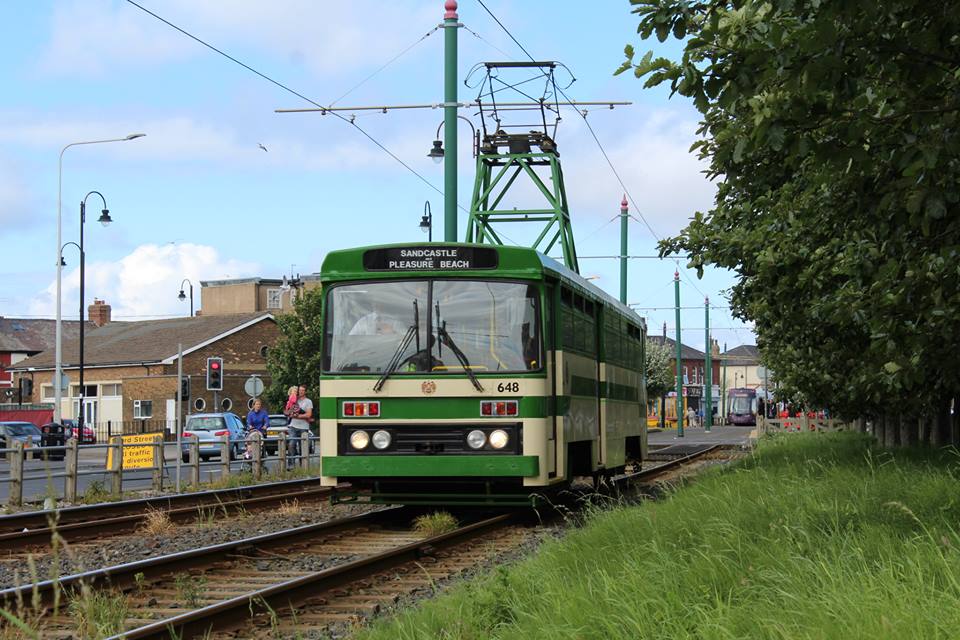 648 leaves Fisherman's Walk for the return journey to Pleasure Beach. 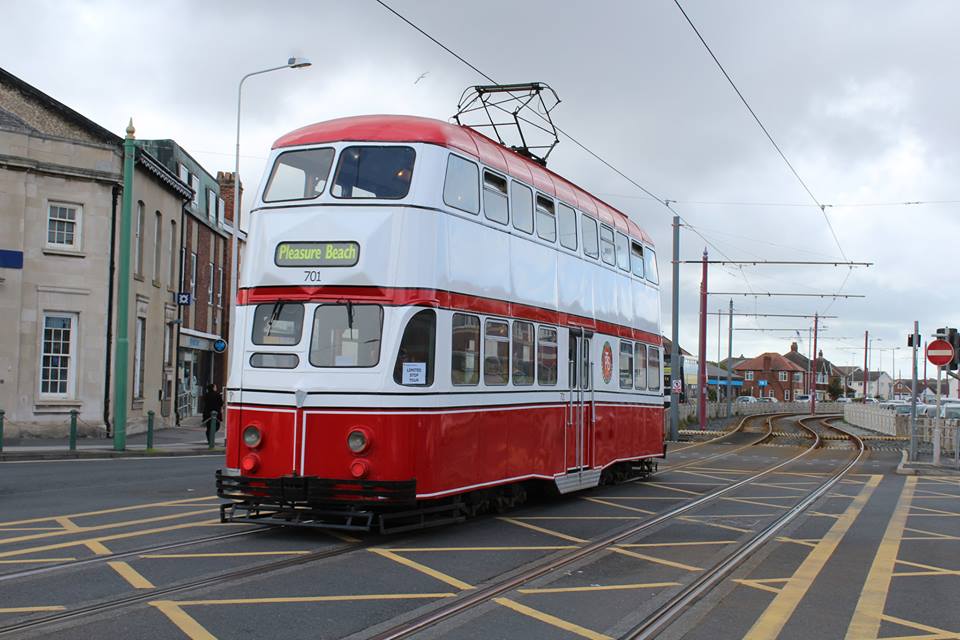