Posted on Wednesday 6 May 2015 by Gareth Prior

The latest tram to feature in our “Picture in Time” series is Dudley, Stourbridge & District Electric Tramways 5 a tram which for many years was the mainstay of the service at the Black County Living Museum but in more recent times has been sent to Wales for an extensive restoration.

5 is a small four-wheel enclosed single deck tram known as a Tividale and was typical of many cars to run in the Black Country at the time. Entering service in 1920 no. 5 was built to the standard Black Country gauge of 3ft 6in and operated on the tramway for around 10 years before the line was closed and it was sold, as with so many other trams across the UK, for further use. Rescued 5 was restored to operational condition for use on the fledgling tramway at the new Black County Living Museum starting in 1980. For around 20 years the tram was the sole tram to run the service and by the turn of the century it was starting to feel the effects of this and with Wolverhampton & District 34 and Wolverhampton 49 now operational the decision was taken to withdraw 5 from service. It seemed that in 2012 its fortunes were set to improve when it was moved to Llangollen Railway for a full restoration but over 3 years later that is where it remains still undergoing work. With the tramway at the Black County Living Museum having been closed for over a year – although recent developments will hopefully see this issue rectified over the next few months – there was obviously no rush for the work to be completed and it is hoped that the restoration on 5 will be completed and it will return home and once again be in service.

This view shows 5 at the Black County Living Museum on 7th August 1988. 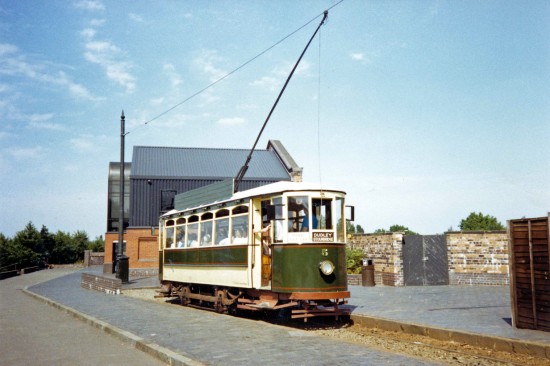