B Fleet Balloons run on split service in Blackpool

As reported previously, filming for a new feature film in Blackpool is causing chaos for the town’s transport services, with disruption to the tramway over three consecutive days, with a partial closure of the promenade enforced between 0700 and 1500. Whilst the return of the unpopular split service was no doubt cursed by the travelling public, it did have one positive side for tram enthusiasts – the use of members of the ‘B Fleet’ in ordinary passenger service.

Whilst the filming was due to take place, the promenade in front of the Tower was closed off meaning that a split service operated on the tramway, with four cars shuttling between Starr Gate and Manchester Square, whilst other trams ran between North Pier and Fleetwood – as usual, no through ticketing was offered and anyone wanting a full length journey faced a walk around the back streets to continue. In theory, enough Flexity trams should have been available to maintain this service, however the film company had requested use of three trams in connection with the filming, and with a few of the class currently out of service, it was necessary to call upon the modernised Balloon cars to supplement the modern trams. On Wednesday 6th May, two Flexities operated between Starr Gate and Manchester Square along with Balloons 711 and 719. This was only the second time this year that any of the ‘B Fleet’ had been used in normal public service, loading and unloading at platforms and performing ordinary stage carriage work rather than premium price heritage tours. Indeed, 711 had not been used in this manner since 2012, when it ran just once after being converted with widened centre entrance porches. Loadings were not especially heavy on what was a cold and wet day, but for the few enthusiasts around the use of these cars was certainly a rare treat. It was also pleasing to see Blackpool Transport’s willingness to use them in such an unusual situation, something that was unlikely to have happened last year when all of the ‘B Fleet’ were effectively withdrawn, except for car 700 which remained operational to partake in events celebrating 80 years of the Balloon class, rather than to assist with the core service.

By mid-afternoon, the full promenade had re-opened and both Balloons had retired to Starr Gate depot where 700 is also currently stabled awaiting possible use. One Balloon car is expected to run again on Thursday 7th May, and possibly again on Friday 8th although this is not confirmed. Further disruption may also occur next week if further filming is required, and this will be confirmed closer to the time, once Blackpool Transport are aware of the situation. 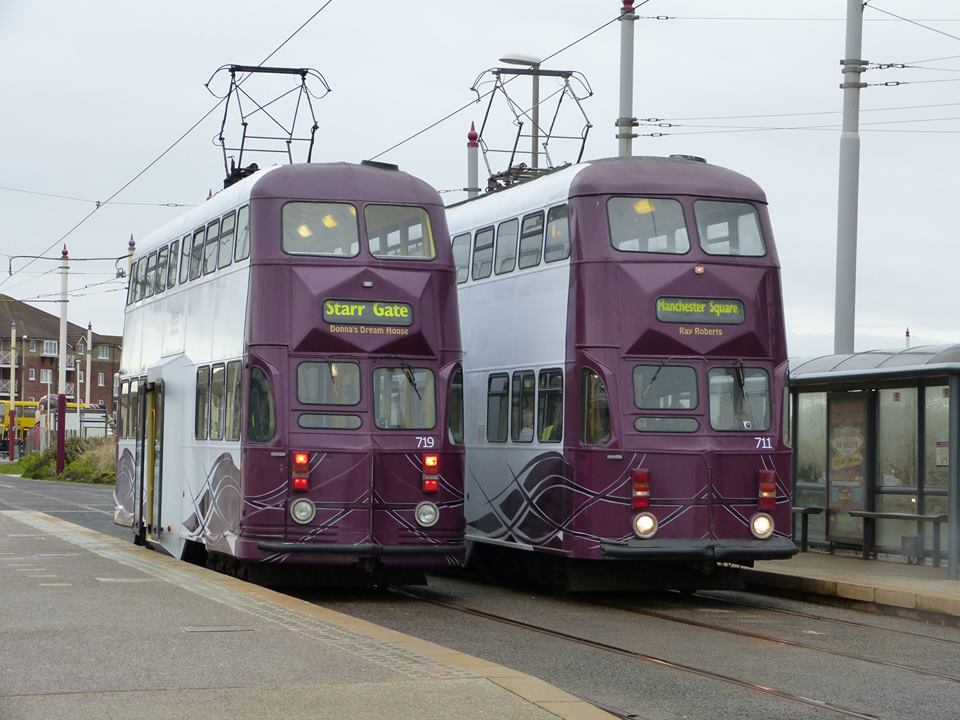 A very unusual scene at Starr Gate on May 6th, with Balloons 719 and 711 both seen in service. (Photo by Gary Conn)