A golden May Day in Blackpool

The second spell of operation for Blackpool’s newly improved heritage tram service occurred over the May Day Bank Holiday weekend, providing enthusiasts, tourists and local residents alike with another chance to enjoy a large number of historic trams in action together. Experience and feedback gained over Easter had been used to make a few tweaks to the gold service which ran on two of the three days, with detailed timetables published in advance to help visitors get the best out of the six car heritage service.

Saturday 2nd May saw the green service in operation with four trams running, although two of these were hijacked for part of the day to operate special tours for the Fylde Tramway Society, whose Annual General Meeting was held in the afternoon. The undisputed highlight was the return to use of Balloon 715 which debuted with a full system tour for the FTS, which included the novelty of a ride through the wash plant at Starr Gate! Later on, Twin set 272+T2 also operated to Fleetwood on hire, although towards the end of its tour disaster struck when the duo failed at Pleasure Beach, and had to be towed back to the depot by the Unimog.

The gold service returned on Sunday 3rd May – a day earlier than originally billed – with a few amendments. Five tours to Fleetwood were scheduled to run, departing from Pleasure Beach at 90 minute intervals. One oddity of the new timetable was an empty run by one of the heritage cars to Bispham, positioning it for a southbound departure at 1000. Unfortunately, dismal weather meant that the planned theme of ‘Balloons and Boats’ had to be axed, and therefore Balloon cars 700, 701, 715 and 717 were joined by two enclosed single deckers, Brush 631 and Centenary 648. The latter suffered a defect and ran in after just one northbound run, with sister car 642 taking its place. All four Balloons managed a run to Fleetwood, as did 642 although the infamous bollard at the Ferry meant that this car was turned back at Fisherman’s Walk.

Monday 4th May finally saw the Fylde coast basked in sunshine, and as a result the open cars were at last brought out to be enjoyed. This day’s output consisted of Boats 230 and 600, Box 40, Standard 147, ‘Princess Alice’ 706 and Balloon 715 – all of which ran to Fleetwood except for 40 which spent the whole day running between Pleasure Beach and Little Bispham, apart from the empty morning run to Bispham. It was pleasing to see that 715 had been washed before entering service for the day, having become absolutely filthy due to heavy rain on Sunday. The better weather brought out more people and some very healthy loadings resulted, particularly on the Fleetwood tours which were as popular as usual.

The new schedules seemed to work extremely well, and publishing the gold timetable for the Sunday and Monday online and posting this information at heritage tram stops was very helpful in enabling the dedicated enthusiasts to plan a day of hardcore tram riding! It was also very pleasing to see the paid staff and volunteers working so well together, and the atmosphere was especially positive across the weekend. It seems that a winning format has now been found and although some further tweaking is likely, the gold running days look set to become increasingly popular and profitable events as the months and years pass. Well done to all involved! 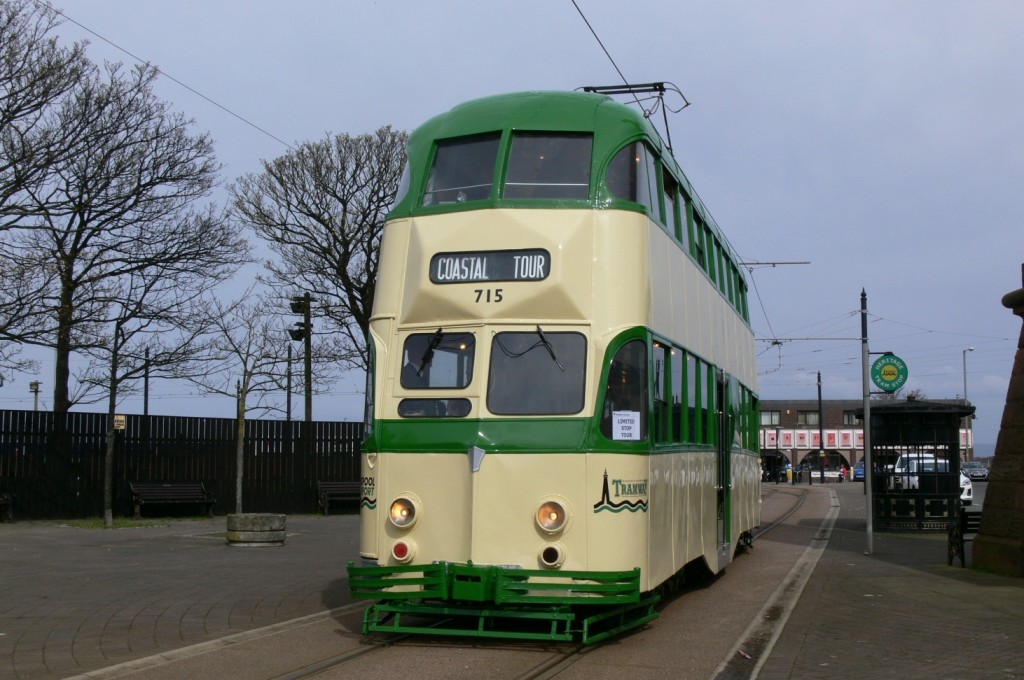 Undoubtedly the star of the May Day weekend - Balloon 715 stands proudly at Fleetwood on its third visit to the northern terminus of the weekend, looking immaculate in its 1990s green and cream livery. 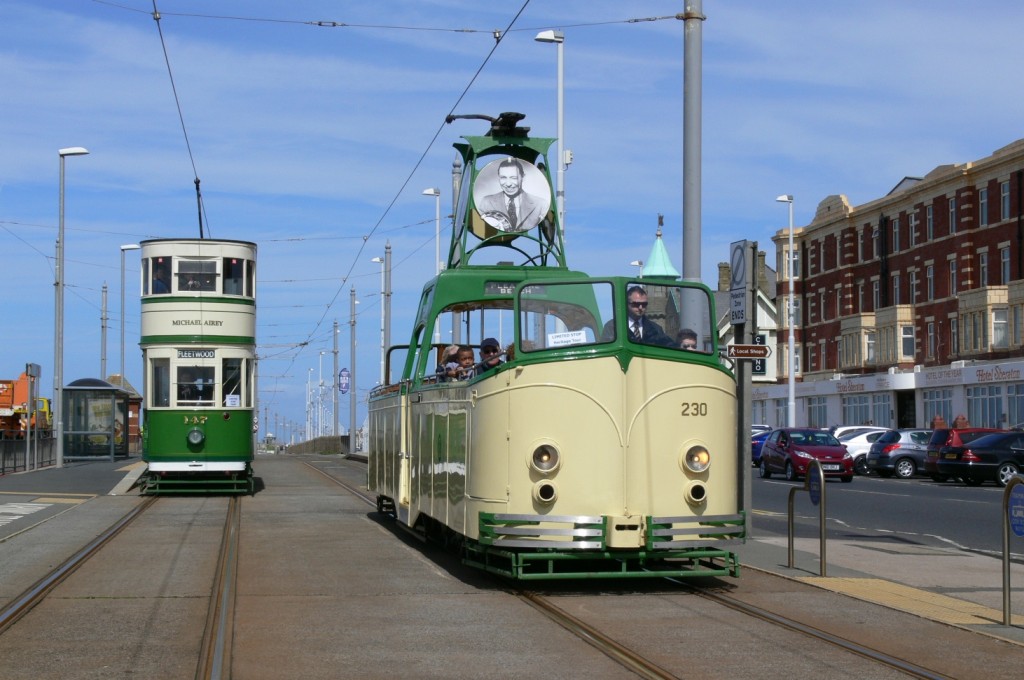 A timeless scene from the gloriously sunny Monday 4th May, with Boat 230 at Cabin as Standard 147 passes on its way to Fleetwood. (Photos x 2 by Andrew Waddington)

7 Responses to A golden May Day in Blackpool