For the third in our “Lost Trams” series we thought as we are in the middle of Blackpool Boat car launches (236 at Crich and 604 in Blackpool) it would be an opportune time to look at one of these popular trams which has found a new home in the United States – 228 (603).

Along with its eleven other sisters 228 was built in 1934 and entered service for the first time on 25th July that same year (becoming only the second of the class to enter service following on from the prototype). The tram managed to avoid the first series of withdrawals in 1963 with saw four of the Boats withdrawn and then scrapped but it only lasted in service in Blackpool until 1975 when it too was withdrawn from service.

It became the second Boat Car to sail across the Atlantic when it departed for Philadelphia on 6th February 1976 where it operated in 1976 as part of the Bi-Centennial celebrations.
For this it was regauged to 5ft 3in track and so when it returned to Blackpool in July 1978 it was of no use to Blackpool Corporation Transport and remained stored at the back of the Depot for over six years.

The tram was to make one final trip across the Atlantic when it was donated to Muni for operation on the historic streetcar “F” line in San Francisco where it was to join a diverse fleet of both American and worldwide trams which operate this line in the City. When it
arrived back in the US it required some work to return it to operational condition (including returning it to the correct gauge) and it started to carry passengers again in 1986.

228 has become a very popular member of the fleet in San Francisco and has even been altered so it can carry wheelchairs.  On the Market Street Railway website (http://www.streetcar.org) it states that 228 operates only in good weather and can most often be seen in use on Fridays and at weekends. 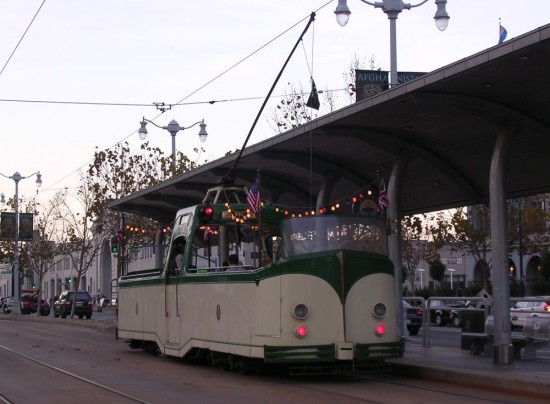 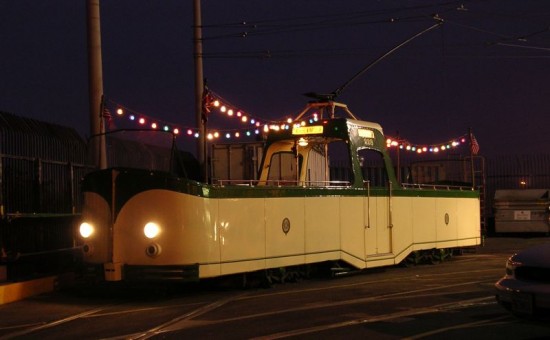 This view from October 2008 shows 228 at operation at night on the "F" line in San Francisco. (Photo: Robert Parks)