As we have previously reported Blackpool Brush 290 (ex-627) is currently undergoing works at Kirkham Prison which will see it painted in a special Queen’s Diamond Jubilee
livery and displayed as part of the 2012 Blackpool Illuminations. Blackpool Council have now released further details of this project which will see the tram displayed by the tableaux on North Shore.

So far the tram has undergone replacement of several of its exterior panels and part of the roof has been renewed and attention has now been turned towards repainting the tram in its special livery at Kirkham Prison. The trolley tower has been removed and taken to the Blackpool Illuminations Depot at Squires Gate for repainting and fitting of commemorative plaques – this will then be refitted to the tram when it is put on display during August. Special internal and external lighting features are also to be installed on the tram.

As part of the Diamond Jubilee livery the windows of the tram are to be decorated by local school children with students from Blackpool & Fylde College, Fleetwood High School and Cardinal Allen High School designing murals. These will feature everything from a Mini
to Blackadder and from the Red Arrows to a 50p coin. The final piece of the tram will be a moving image of the Queen which will be installed at the front and is currently being designed by the Illuminations department.

Once the 2012 Illuminations are over it is planned that 290 will become one of the first trams to move to Copse Road Depot as part of the Fleetwood Heritage Leisure Trust’s new Museum at this location. A Planning Application has now been filed with Wyre Borough Council for a change of use of the old Tramroad Depot and the Trust are in discussions with a range of funding organisations to help the plan for this historic building to become a reality. An appeal has also been launched for the costs of the Depot doors.

The Trust will be holding briefings at Copse Road Depot on 14th July and on Tram Sunday further information will be available in one of the display heritage trams in Pharos Street which are to provided with the cooperation of Blackpool Transport. This will mean anyone interested in finding out more about their ambitious plans not only for Copse Road but also in Fleetwood in general can find out directly from those involved.

More details on the plans of the Fleetwood Heritage Leisure Trust – and how you can help – can be found at http://visitfleetwood.co.uk/ 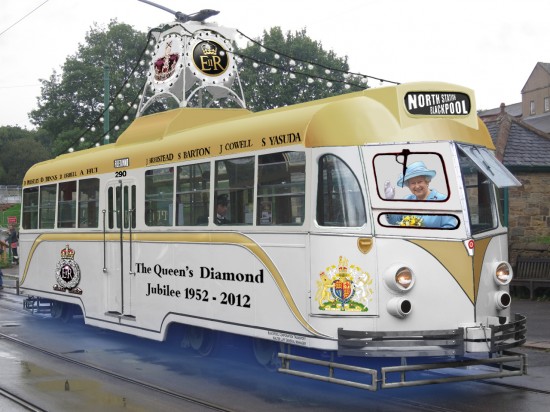 An artists impression of how Brush Car 290 will look when it is completed in its Diamond Jubilee livery for the 2012 Blackpool Illuminations. (Photo courtesey of Fleetwood Heritage Leisure Trust)

3 Responses to More details on the Brush Jubilee Car revealed