Since arriving at the East Anglia Transport Museum in early 2011, Sheffield ‘Roberts’ car 513 has seen somewhat erratic use compared to the extensive use that had been hoped for. Its appearances in passenger service during 2014 have been noticeably scarce, primarily due to some issues with the tram’s antiquated wiring.

After receiving some adjustments to its brakes, 513 debuted in service for the year in May but unfortunately, soon afterwards, the car developed a problem with its signal bells. Much like sister car 510 at Crich, 513 would probably benefit from a complete re-wire but to do this it would be necessary to partly dismantle the interior, due to the wiring being effectively trapped between two layers of aluminium panelling. The tram remains available for use on a restricted basis and did appear at the museum’s recent gala weekend, but is unlikely to see much use until this problem can be adequately resolved. As it of course remains the property of Beamish Museum, it remains to be seen whether the busy volunteers at Carlton Colville will indeed carry out the required work on Sheffield 513 or whether this task will ultimately be carried out at Beamish.

2014 has been a rather challenging year at East Anglia with Blackpool VAMBAC 11 also seeing infrequent use due to various issues, and is presently out of service after one of its contactors failed. Worse still, Amsterdam 474 has developed a serious bearing problem with one of its motors, and to rectify this it will have to be lifted off its truck for the first time since arriving at the museum some three decades ago (no eight year overhauls here folks!). It is expected that both motors will receive some attention at the same time which will hopefully prevent a repeat failing with the other, as neither have had any work done to them in the entire time that the tram has been a British resident.

These problems have placed considerable pressure on the museum’s operational stalwarts, Blackpool 159 and London Transport 1858, although both have coped admirably despite themselves showing some signs of their age. Hopefully at least one of the other trams at the museum will be repaired in time to play a more meaningful role in the operating fleet during 2015, whilst looking ahead, the restorations of both Lowestoft 14 and Glasgow 488 will provide two ‘good-as-new’ tramcars which will be an enormous relief for all concerned when they are completed! 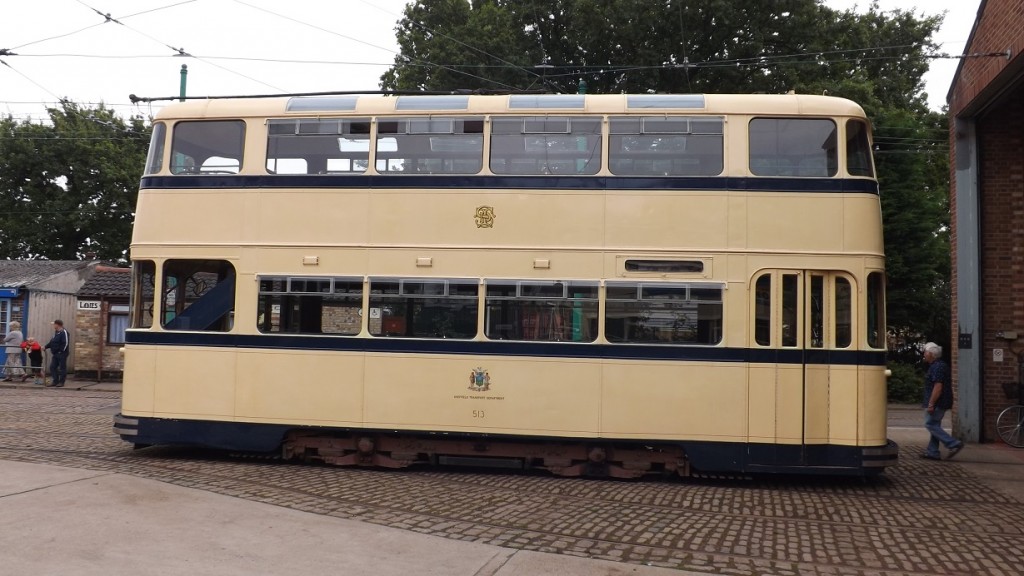 Despite being confined to the tram shed at East Anglia for much of 2014, Sheffield 513 did make an appearance in service at the 'End of Season Gala' event and is pictured here in front of the depot waiting to enter service on that occasion. (Photo by Tony Waddington)