Posted on Monday 29 September 2014 by Gareth Prior

Wednesday 24th September saw the departure from Trafford Depot of the 16th T68 to go for scrapping with 1025 the latest to make the long and sad journey to Booths in Rotherham. The last few weeks have seen acceleration in the movement of the T68s away from Manchester for scrapping and it looks as if the end really is rapidly approaching.

1025 originally arrived in Manchester on 22nd March 1992 and first carried passengers on 26th May 1992. For most of the early part of its career it didn’t really have many key milestones and it wasn’t until December 2009 that it had a really major noteworthy claim to fame when it was the first LRV to receive cab air conditioning units as part of a trial which was eventually extended to most of the rest of the fleet. It was also fitted with a trial wheel flange lubrication system in 2010 which saw some of the step boxes removed from the vehicle and as a result it could no longer be used as part of a double unit.

It was the last of the original batch of 12 withdrawals to be taken out of service running its last journeys on 16th January 2013 although it was then fitted with an icebreaking pantograph for a couple of months at a time when ice on the overhead was making the news for causing delays to the service. This slight extension to its working life was not to last long though and it was fully withdrawn on 21st March 2013.

1012 has now entered the workshops at Trafford for final preparation ahead of its own journey across the Pennines. 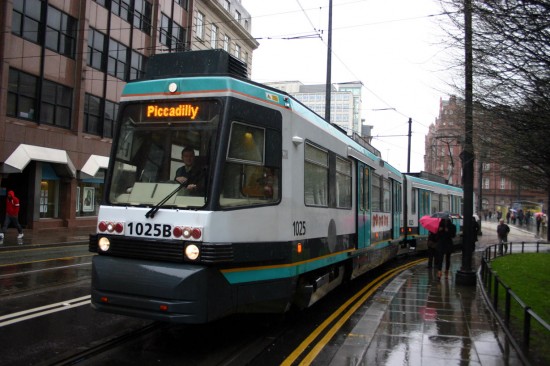