Newcastle 114 goes back to Beamish

A short but sweet visit to Crich Tramway Village for Newcastle 114 came to an end on Friday 19th September, when the tram departed for its usual home at Beamish, the Living Museum of the North. The tram had been borrowed for last weekend’s ‘Electric 50’ event and featured prominently in most of the key events, including being displayed alongside fellow survivor from the same city, Newcastle 102.

114 debuted in passenger service at Crich on 12th September and then ran faultlessly for five consecutive days, including over the ‘Electric 50’ weekend. It was then prepared for its long road journey back home, departing on the rather murky morning of September 19th – quite a contrast from the fine sunny weather which blessed its days of operation at the Derbyshire museum. The tram arrived back on home turf later the same day, and is expected to be back in service at Beamish within the next few days following its first ever loan period away from home. As usual, Scott’s Heavy Haulage provided the low loader used to transport 114 back home.

114‘s visit to Crich was considered to be a great success and is further proof of the increasing level of co-operation between the National Tramway Museum and other heritage tramways. Although it is not expected that Crich will be playing host to more visiting cars on a regular basis as has happened at Beamish since 2009, hopefully the success of this short-term loan could pave the way for further trams from other museums to operate at Crich in the future. For now though, we must thank everyone who overcame various obstacles to make this loan happen, both at Crich and Beamish, as it undoubtedly created some of the most unique and memorable sights on any UK tramway in 2014, whilst also bringing this superb tramcar to a whole new audience and allowing enthusiasts to enjoy it in a very different location. 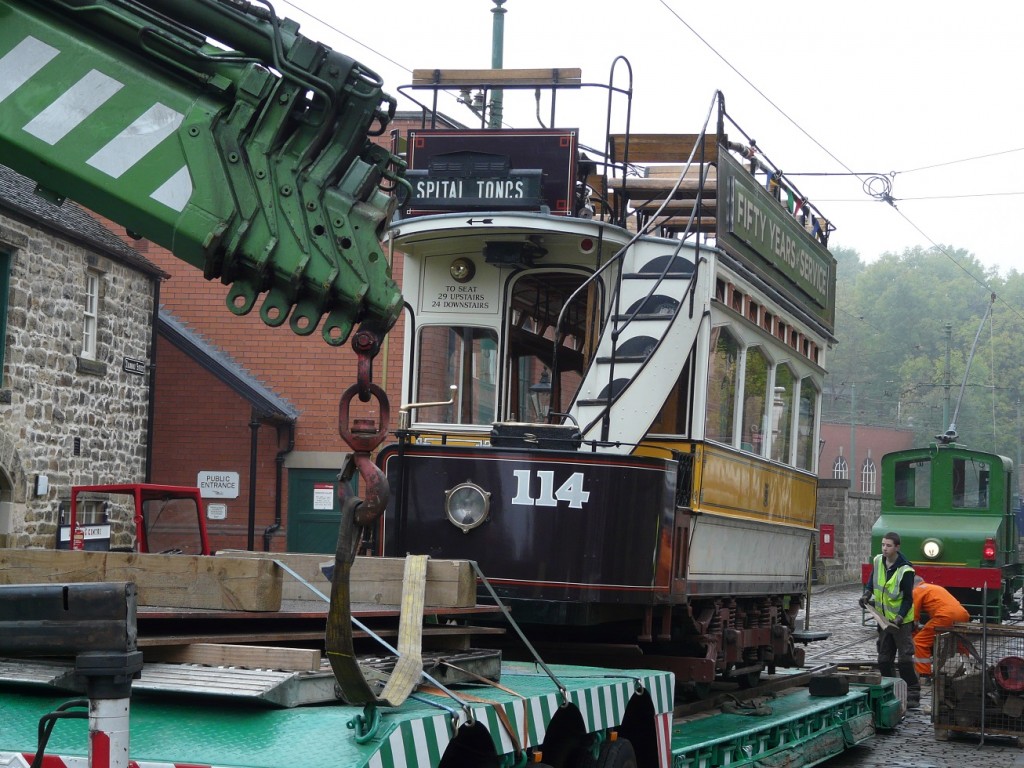 Newcastle 114 is seen in the latter stages of being loaded up for its journey to Beamish early on 19th September. 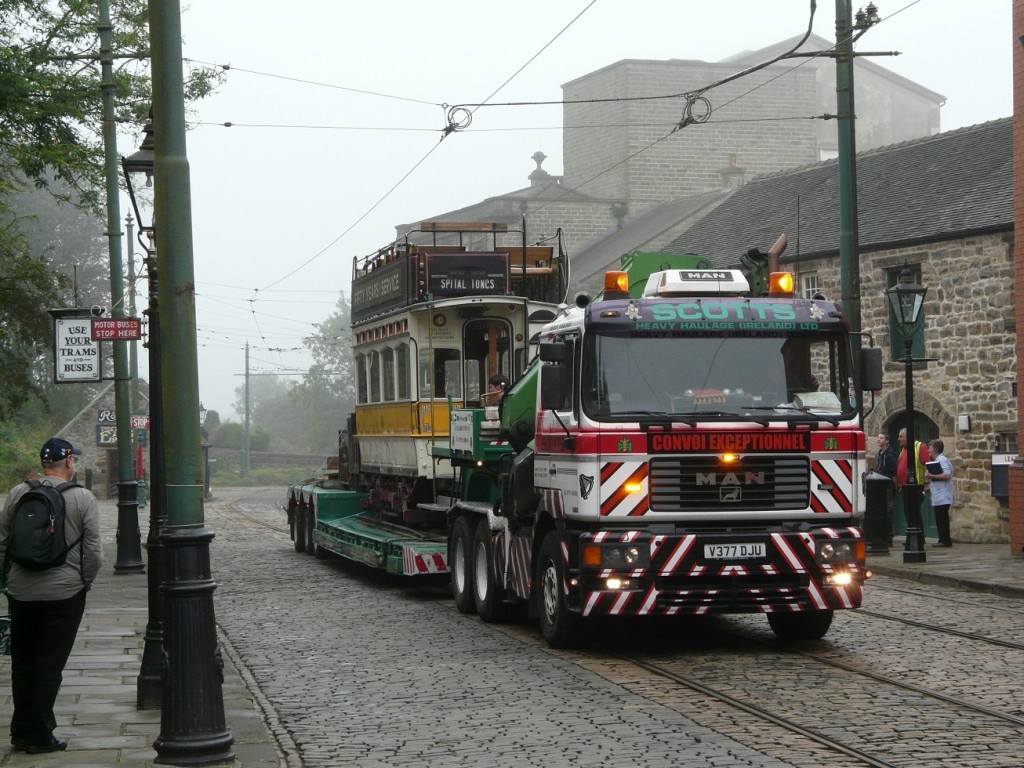 114 in the street, loaded up and ready to leave Crich behind. 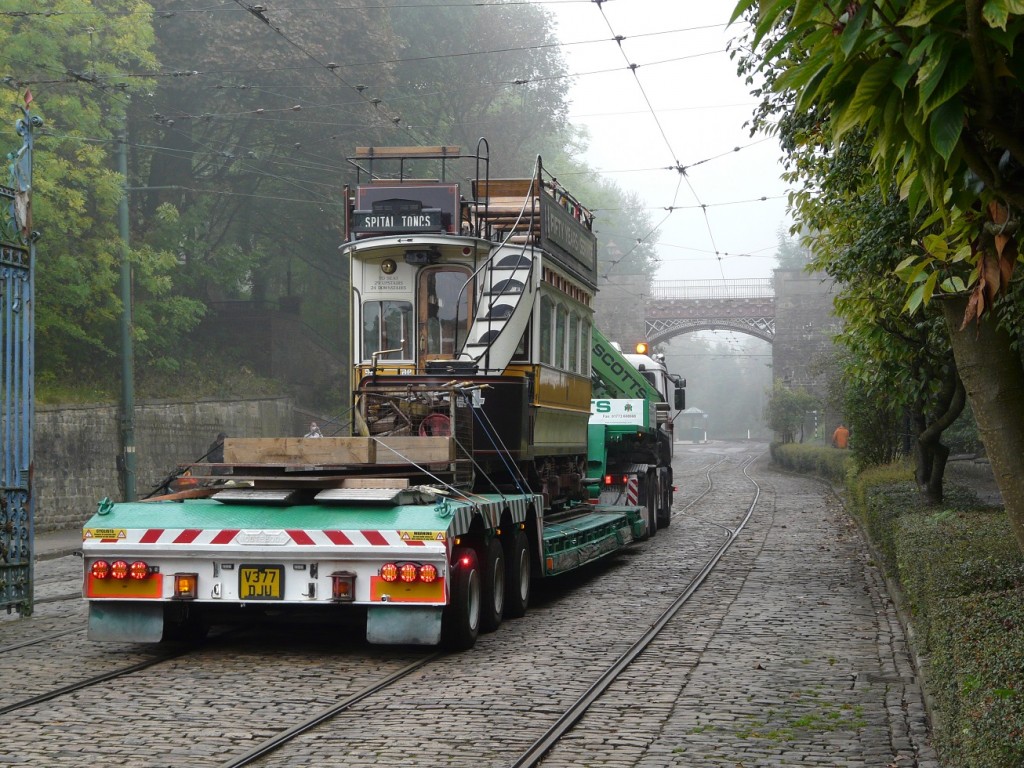 The journey back to Beamish begins for the lorry carrying Newcastle 114 as it heads down the street and into the fog! 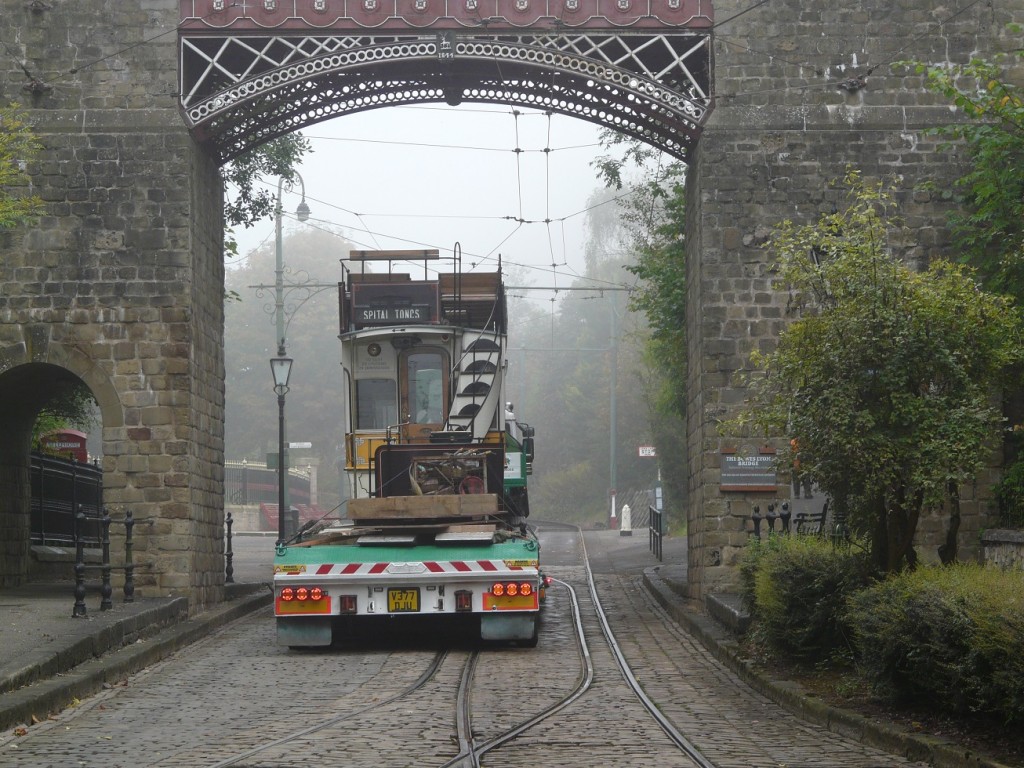 114 disapears under the Bowes Lyon Bridge for the last time bringing its highly succesful visit to Crich to an end. (Photos courtesy of Crich Tramway Village)