And another T68 goes for scrap

The scrap line at Trafford Depot is really starting to look a lot smaller following the departure of another of the T68s for scrapping. 1002 is the latest example to be loaded onto the back of an Allelys low loader before departing early on Friday 19th September – the 15th to leave for those keeping count.

1002 – which had spent the last couple of weeks in the workshops for final component removal – was delivered to Manchester on 16th October 1991 and even before public services had commenced it had a number of claims to fame. It was the first LRV to be named (MANCHESTER ARNDALE VOYAGER – November 1991), was the first to carry passengers when it was used to transport LRTA members from Queens Road to Crumpsall (24th November 1991) and was also exhibited at the G-Mex stop during the Light Rail Transit conference.

It then entered service on 6th April 1992 but suffered two fairly major collisions in its career (1999 at Piccadilly and 2005 at Corporation Street). As a result of these collisions 1002 (or at least part of it) has previously left Manchester three times with Washwood Heath (half of the LRV due to the first collision), Wolverton (refurbishment) and Crewe (second collision) all enjoying the company of the vehicle over the years.

1002 was also the first LRV to reach St Werburgh’s Road when it was used for gauging and was used for the same purpose on the Oldham and Rochdale line as far as Central Park. It was withdrawn on 18th November 2013 and ten months and one day later it has left Manchester for the last time. 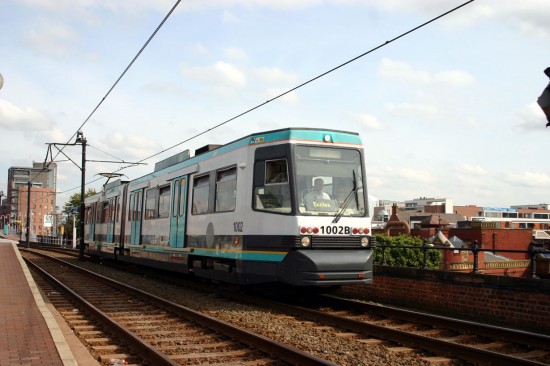 1002 departs G-Mex (as it was at that time) on 7th September 2009. A little over five years later and the LRV is on its way for scrapping. (Photo: Gareth Prior)

1 Response to And another T68 goes for scrap