Posted on Sunday 1 June 2014 by Gareth Prior

Finally! 57 and a half years since Edinburgh Corporation Tramways closed their last route and eight years since the long and drawn out construction period begun the new Edinburgh Trams network has welcomed its first fare paying passengers. At 0500 on Saturday 31st May a packed tram departed Gyle Centre for York Place in Edinburgh City Centre starting a new chapter in tramway history in Scotland as the country can once again say that they have an operating street tramway and the Summerlee Heritage Tramway is no longer the only tramway in Scotland.

The tram chosen to operate that very first service was 275 which up until a few days previous to the opening had been carrying the #readytoroll vinyls on the windows. Departing Gogar Depot shortly before 0500, driven by Craig Scotland, the tram gently made its way to the Gyle Centre stop where it was met to by large crowds of people wanting to say “I was on the first Edinburgh tram”. With tickets purchased from the machines – with the first 10,000 across the network being special edition Platinum versions – the eager passengers soon boarded the tram and 275 set off with the first revenue earning tram service in Edinburgh since 16th November 1956.

The day did not go completely smoothly (but then how many first days of new tramway systems go completely according to plan? Who can forget the first day on the upgraded Blackpool Tramway!) but nonetheless 21,000 passengers were recorded as travelling on the trams during the day. There were a minor problems with the CCTV and internal electrical systems on a couple of the trams during the day which caused them to be removed from service and returned to depot but the third track at Haymarket had been used to stable spare trams for eventualities such as this to try and minimise disruption for passengers.

There were also a few minor signalling problems (according to a spokesman from Transport for Edinburgh the system can’t cope when trams bunch together) and some ticket machines had teething problems (apparently this was partly due to them filling up with money) but 25 extra staff were put out onto the system to sell tickets.

It seemed that even the weather was interested in making things run smoothly on the day as it was sunny and warm throughout and this certainly encouraged the crowds to try out the trams with good loads seen for most of the day with even that very first service seeing standing room only. The peak period for carrying passengers was said to be in a three hour period after 1130 obviously after people had got out of bed and seen it was a nice day and what better could they do then go for a ride on a tram!

In addition to 275 running the first service the following trams were also seen carrying passengers: 255, 259, 260, 261, 263, 266, 267, 271, 273, 274 (not a complete list). It has now been confirmed that just 10 trams will be needed on a daily basis to provide the 8-10 minute frequency but on the first day 13 trams were used as at one stage three extras were required to help move passengers promptly. It is hoped that as the system beds in passengers will have shorter waits at stops than they did on the first day.

The second day of operation – Sunday 1st June – was said to be a quieter day but the trams were still popular as more people tried them for the first time. The next week will see two major tests for the line, firstly on Monday it will be the first commuter day and it will be interesting to see how many commuters move to use the trams and how easy it copes with this. Then on Tuesday 3rd June, One Direction are in concert at Murrayfield Stadium and so the trams are likely to be inundated by teenage girls heading to listen to the “music” of their heroes.

We will be adding a Photo Gallery from the first few days of Edinburgh Trams shortly (it will definitely be uploaded during a month with a u in it!) and if you have any photos you would like to share with us please email us at the usual address and they can be included with these. Thanks to those who have already contributed. 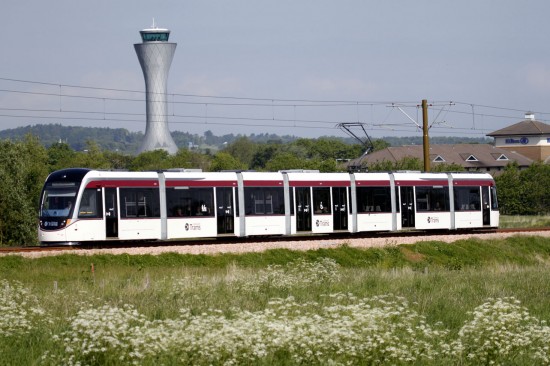 273 is seen having departed the Airport, the control tower of which can be seen in the background, with a service bound for York Place. (Photo: Jane Buck) 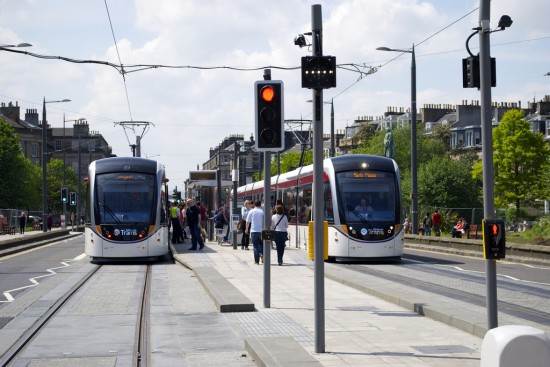 Two trams are seen at the York Place terminus on the first day. 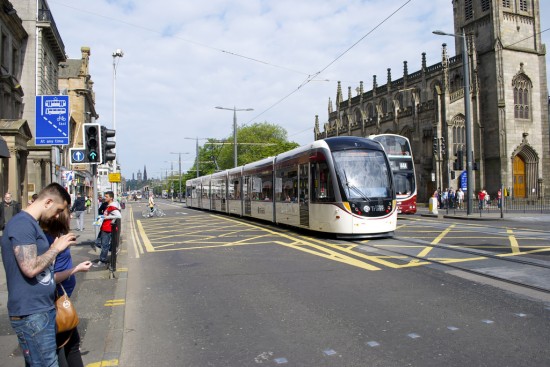 Not everyone seemed to be interested in the historic event happening in front of them it seemed... 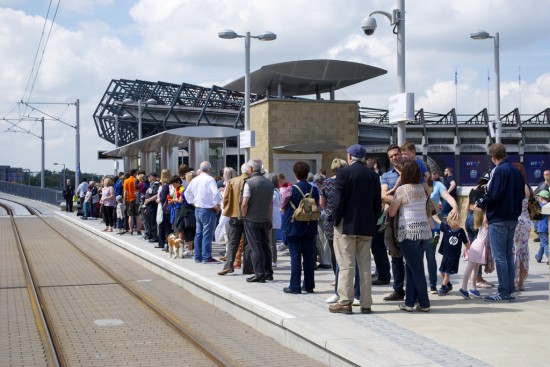 Scenes such as this was not uncommon on the first day and hopefully will be a regular sight: crowded platforms. This one is a Murrayfield Stadium. (Photos x3: Fred Collins)