On Wednesday 21st May the latest Metrolink T68 departed Manchester for scrapping in South Yorkshire when 1019 made the now far too familiar journey on the back of a low loader.

1019 was loaded late on Tuesday 20th May but did not actually depart Manchester until the following morning. In departing it becomes the first of the three remaining unmodified T68s to make the one way trip to Rotherham. The unmodified T68s retained wing mirrors and extended unmodified autocouplers amongst other features (the other two unmodified vehicles were 1018 and 1020).

It looks as if the next T68 to leave may be 1006 which has recently been moved into the workshops for final component recovery although no date has yet been set for its departure. 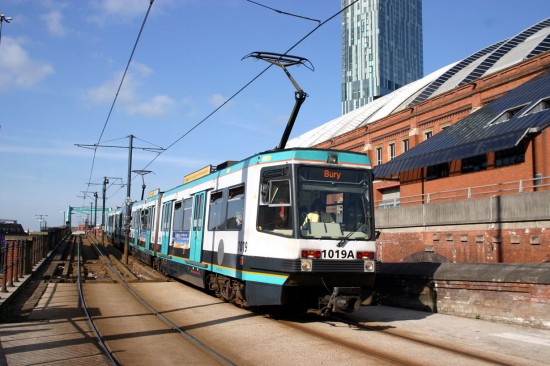 1019 is seen here in happier times when operating as part of a double unit with 1018. They are seen leaving the viaduct at G-Mex on 3rd May 2011. (Photo: Gareth Prior)