This is your one stop guide to when and where you can ride on heritage trams in the UK and Isle of Man. Another week and more excitement in the heritage tram world with the latest batch of heritage running in Blackpool including the use of Pantograph 167 back on its home tramway, on loan from Crich. Speaking of Crich there is another special event at the home of the National Tramway Museum with “Beside the Seaside” starting a nine day spectacular whilst there will be one final chance to ride on a Manchester Metrolink T68 (OK we’re stretching the heritage aspect this week!) and the Birkenhead Heritage Tramway will be open daily during Half Term.

Current Status: Operating daily until Sunday 2nd June and then every Saturday and Sunday

Operating hours: Services run from Taylor Street Museum at 1300 and then every half hour until 1630, returning from Woodside Ferry at 1315 until the last possible return at 1615. A two tram service will run on Monday 26 May.

Saturday 24th-Monday 26th May with a 3 tram service on each day. A full preview of this can be found at http://www.britishtramsonline.co.uk/news/?p=7598.

Next special event: Beside the Seaside – 24th May-1st June. A full preview of this event can be found at http://www.britishtramsonline.co.uk/news/?p=7498.

Daily from Saturday 24th May until Friday 11th July – Blue timetable. First tram Seaton at 1000 and then every 20 minutes until 1700 with returns from Colyton starting at 1030 until the last departure of the day at 1730. 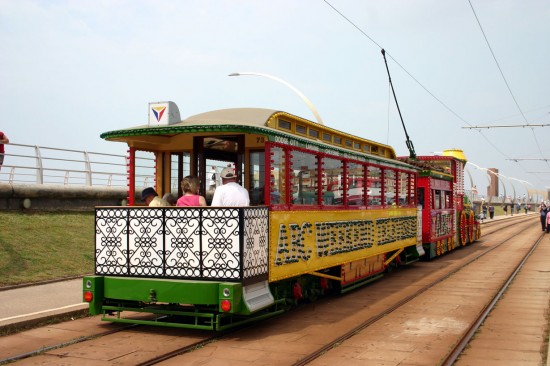 The next batch of heritage operation in Blackpool takes place over the Bank Holiday weekend 24th-26th May and will see Blackpool Pantograph 167 featuring heavily across the three days. A tram which will be making a rare daylight appearance will be the Illuminated Western Train 733+734. Of course the carriage of this set is a former Pantograph car and so its appearance alongside 167 will be a welcome sight. Our photo on this page this week features the Western Train when it was used on trips during the Totally Transport event on 28th June 2009 (only 5 years ago but it seems a lot longer than that!). (Photo: Gareth Prior)