Posted on Friday 23 May 2014 by Andrew Waddington

On Friday 23rd May, Blackpool 167 made the short journey along its native tramway to the Starr Gate depot, ahead of its highly anticipated debut on heritage tour duty the next day. Having been hidden away since arriving back in its former home town a few weeks ago, the work to prepare 167 for service on the upgraded Blackpool tramway is now complete and on this day it was moved from Rigby Road to Starr Gate, with a few representatives from the National Tramway Museum on board to sample its first outing on the promenade since 2010.

The Tramway Museum Society, who of course own this beautiful tram which is on loan to Blackpool Transport for the summer season, have assisted with the fitting of transponder equipment and brackets on one side of the car to allow a bamboo pole to be carried around, to ensure that these modifications can easily be reversed so as not to compromise 167‘s historical integrity. They then accompanied Blackpool Transport staff on 23rd May in taking 167 to Starr Gate depot, with this trip also acting as a test run – and happily the tram performed superbly. The move to Starr Gate could only take place on this date due to the continuing works at the Manchester Square traffic junction, although hopefully the forthcoming Bank Holiday weekend will be the last time that this issue affects the heritage tram operation.

Not only was this of course the first visit to Starr Gate depot for car 167, but also the first time it had been to the southern end of the tramway since 1998, as this section was closed off when it last came to visit in 2010. It was also unable to operate north of Bispham, so its expected run to Fleetwood on the morning of May 24th will also be a very special occasion, returning this stunning tramcar to some of its old haunts. Another interesting fact is that 167 has now been stabled inside no less than five different tram depots in Blackpool during its life – Bispham, Copse Road Fleetwood, Blundell Street, Rigby Road and now Starr Gate!

167 was not the only tram to be transferred to Starr Gate on May 23rd, as the illuminated Western Train  733+734 was also moved on the same day ahead of a rare daylight appearance in passenger service on Sunday 25th May. To clear some space for the new arrivals, Balloon 700 has now returned to Rigby Road, where it joins Centenary cars 642 and 648, which both moved back after running over the last Bank Holiday weekend. The scene is now set for what will hopefully be a fantastic weekend of vintage tram action in Blackpool – and don’t forget that we will be providing LIVE coverage of the weekend’s events on our Facebook page! 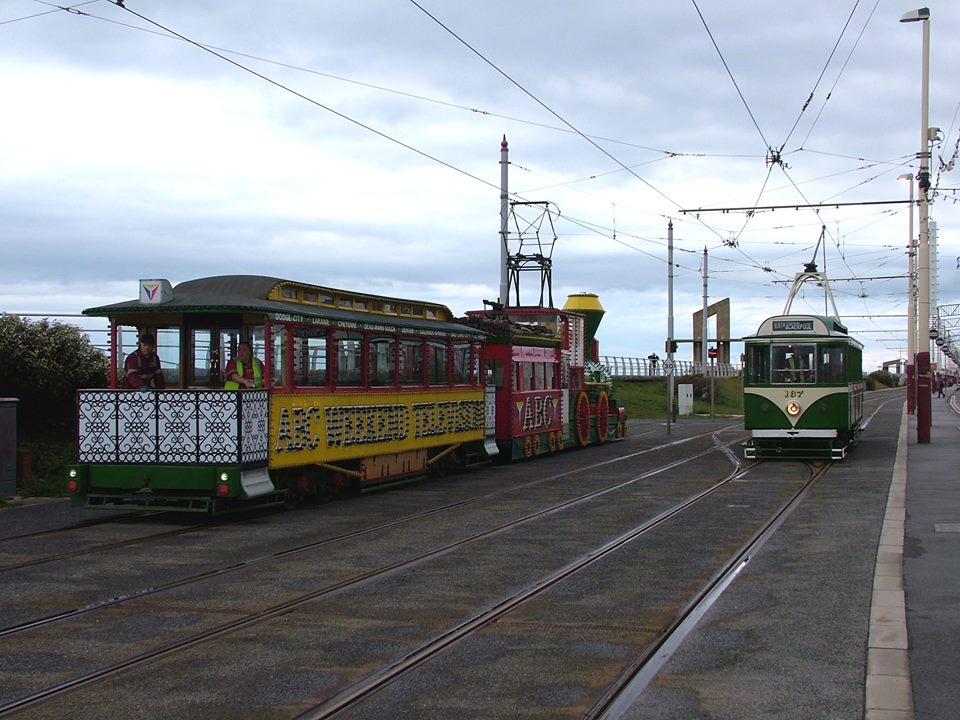 A very unusual scene at Starr Gate on May 23rd with two Pantograph cars - well sort of! 167 is seen arriving as the Western Train 733+734 is shunted into the modern depot. (Photo courtesy of Blackpool Heritage Tram Tours)