This is your one stop guide to when and where you can ride on heritage trams in the UK and Isle of Man. This week sees another special event taking place at the Crich Tramway Village with the launch of Sheffield 510 featuring as part of the “Best of Sheffield” event which takes place between 17th and 23rd May. As soon as that event finishes Crich is off and running with “Beside the Seaside”, a nine day event between 24th May and 1st June and at the same time it is the next Blackpool heritage operations including Blackpool Pantograph 167.

Saturday 24th-Monday 26th May with a 3 tram service on each day. A full preview of this can be found at http://www.britishtramsonline.co.uk/news/?p=7598.

Next special event: The Best of Sheffield – 17th-23rd May. A full preview of this event can be found at http://www.britishtramsonline.co.uk/news/?p=7374.

Beside the Seaside – 24th May-1st June. A full preview of this event can be found at http://www.britishtramsonline.co.uk/news/?p=7498.

Mondays-Fridays until Friday 23rd May – Yellow timetable. First tram Seaton at 1000 and then every 30 minutes until 1600 with returns from Colyton starting at 1030 until the last departure of the day at 1630.

Saturday 17th & Sunday 18th May and then daily from Saturday 24th May until Friday 11th July – Blue timetable. First tram Seaton at 1000 and then every 20 minutes until 1700 with returns from Colyton starting at 1030 until the last departure of the day at 1730. 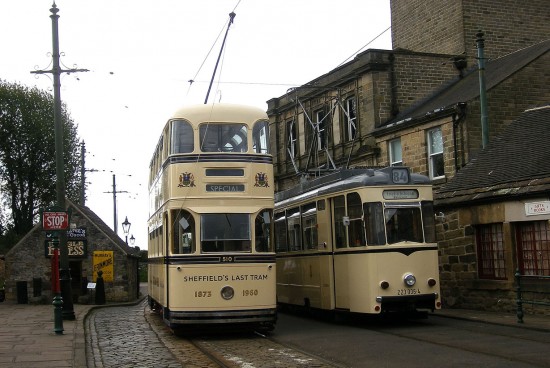 Due to be launched at this week's "Best of Sheffield" event at Crich is Sheffield 510 after an overhaul funded by the TSO. The tram is seen here alongside similarly liveried Berlin 223 006-4 on 7th May 2014 during testing. (Photo: Hazel Quarmby)