Posted on Sunday 11 May 2014 by Andrew Waddington

Excellent news to report from Blackpool concerns two trams formerly owned by the Lancastrian Transport Trust, both of which are now set to be returned to their former home at Blackpool Transport’s Rigby Road depot. The trams concerned are Balloon car 704 and the illuminated ‘Rocket’ 732, both of which are expected to be rescued from outside storage and moved into more suitable undercover accomodation shortly.

704 has had a very turbulent time in the last few years since being offered for sale. Initially acquired by the Manchester Transport Museum Society, ownership of the car was later transferred to the LTT but it ended up in outside storage at Marton in 2012. When other trams were retrieved for inclusion in Blackpool Transport’s own expanded collection of historic trams, 704 was left all alone and the future looked extremely bleak for the tram after another preservation attempt fell through. However, salvation for this tram came from a private individual who has not only agreed to buy the tram and give it a more secure future, but has also arranged for it to be stored at Rigby Road. It is understood that 704 will be placed on loan to BTS for an indefinite period, and ultimately it is planned to restore the car to its original open-top condition, numbered 241. 704 is an ideal candidate for such a project as it was the dire condition of its roof which led to its withdrawal from service back in 2003, and having been heavily stripped since then it would require a major overhaul to be returned to an operational condition anyway. Of course, Blackpool is already home to one open top Balloon car, but ‘Princess Alice’ 706 was never considered an authentic restoration as it has modern features such as hopper glazing, single destination screens and a revised trolley canopy. Restoring 704 would therefore provide the opportunity to have a much more authentic open top streamliner back in the fleet for the first time since the early 1940s, and although this is unlikely to happen for the forseeable future, the idea of two open top double deckers running together in Blackpool is certainly a mouthwatering prospect.

As if 704‘s imminent return wasn’t exciting enough, it has also been confirmed that the iconic illuminated Rocket 732 will also be returning to Rigby Road, with the two moves expected to take place in quick succession to make good use of the low loader whilst it is in Blackpool. This tram has of course been seen by many thousands of people on the Gynn roundabout since being placed there on static display following a cosmetic restoration in summer 2012, but it has suffered at the mercy of the coastal climate, and it is therefore a great relief that it will soon be back undercover. The tram had been loaned to the Illuminations Department, but this loan period has now been terminated early to allow 732 to go back home; something which could well be a relief to the hard working staff and volunteers who have battled to keep the tram looking respectable as part of the annual illuminations display. Like 704, the restoration of the Rocket will almost certainly be a very long term project, but at least it will be safe and its future in the heritage fleet has been assured. 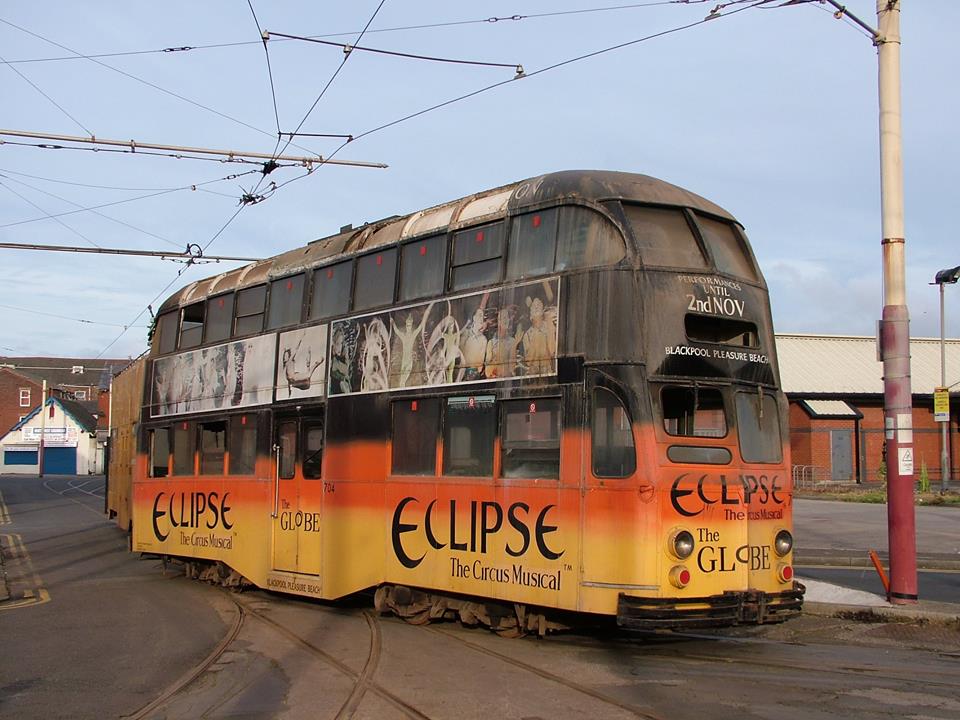 A rather dilapidated looking Balloon 704, still retaining its advert livery for the long-gone 'Eclipse' show, is seen on the occasion of its departure from Rigby Road in September 2012. Who could have guessed then that it would later be returning home for a full restoration? (Photo courtesy of Blackpool Heritage Tram Tours)