The annual tramcar mileage figures published by the National Tramway Museum Society always make for interesting reading, and the statistics for the 2013 season which have just been published are particularly fascinating. Thanks to a glorious summer, two of the four trams which ran more than 1000 miles at Crich were open cars, and it is also noteworthy that the top three trams were all unserviceable just two years ago. This has given some of the ‘old guard’ a bit of a rest, and it is also welcome to see more variety and interest in a running fleet which had often served up a very predictable selection of vehicles in the recent past.

Glasgow 1068 operated the most mileage of any tram at Crich during 2013, clocking up a hefty 1229 miles. This is particularly impressive as it had been sidelined a few years earlier, and some claimed that it would require major mechanical and body work to be fit for such extensive use again – however, a lick of paint seems to have given it a new lease of life! 1068 also spent a few weeks operating at Beamish Museum in April, so the total mileage performed by the car in 2013 is presumably quite a bit more than the recorded Crich figure.

In second place is Blackpool ‘Boat’ car 236, which proved extremely popular with crews and visitors alike last summer, and helped to compensate for the temporary withdrawal of other open cars such as Fleetwood ‘Rack’ 2 and Southampton 45. The 1052 miles it ran last year is only slightly lower than the total mileage it accrued during a past visit to Crich in 1985, when it was exchanged for some of the TMS cars which were loaned to Blackpool in connection with the tramway’s centenary celebrations. Blackpool 166 (495 miles) and London United 159 (479 miles since its belated entry into service in July) also contributed towards an unusually high 28% contribution to the year’s total mileage from the open cars; an 11% increase on the previous season!

Following major workshop attention, Leeds 345 clocked up 1037 miles in 2013 making it the top enclosed car, whilst the more standard fare (sorry for that!) of Blackpool 40 was the fourth and final tram to reach four figures, recording 1016 miles. This meant that some of the trams which normally dominate the mileage charts at the museum had an easier year, with 2012’s champion Leeds 399 managing just 704 miles in 2013. Two other cars which are sometimes considered ‘old hat’ by regular visitors, Chesterfield 7 and Glasgow 22, failed to even reach the 600 mile barrier. Unsurprisingly, the least used electric tram was Metropolitan 331 which managed only 17 days of use before a derailment led to its premature withdrawal in early July, hence it only did 239 miles.

These figures certainly show that there is still plenty of potential with variety of trams available for service at Crich, even with a lower number of vehicles operational than was the case in 2012. Next year’s chart could well be even more interesting, with several trams due to enter or return to traffic following workshop attention. It has also been confirmed that the museum plans to run a minimum three car, ten minute service every day during the 2014 operating season, which should push the overall figures up from the 11569 miles worked by the fleet last year. 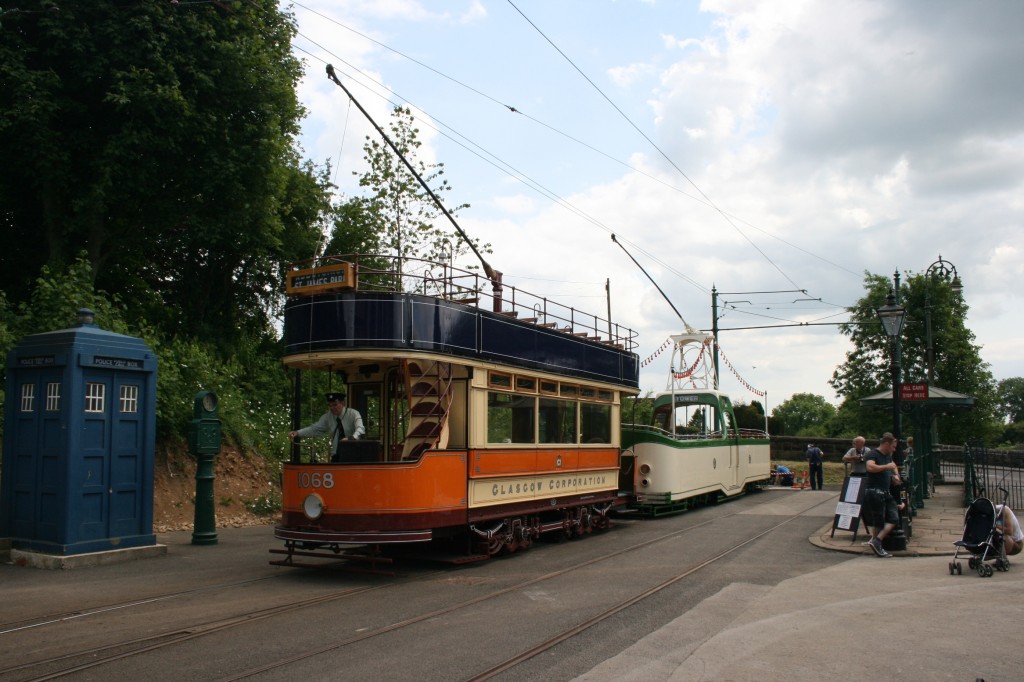 The two most extensively used trams in the Crich fleet during 2013, Glasgow 1068 and Blackpool 236, seen together at Town End on a typically warm day last summer. (Photo by Joe Savage)