Posted on Monday 2 December 2013 by Gareth Prior

Testing of trams in Edinburgh has now been extended through to Haymarket with 264 performing the first trip on Monday 2nd December. The tram was tested at walking pace between Edinburgh Park and Haymarket to allow measurements to be taken and this now means that 11km of track is available for testing.

Testing of Edinburgh Trams continues to be according to the revised schedule and it is planned that Princes Street and then the terminus at York Place will be reached later this week. Initial tests through the centre of Edinburgh are likely to be overnight when other traffic will be at a minimum and the Police should be in attendance to make sure everything goes smoothly, as is normal with first tests of street sections of tramway in the UK.

Cllr Lesley Hinds, Transport Convener at the City of Edinburgh Council, said: “This is another long section now under testing and it means there’s 11km of track in use. Of course, there’s more testing to come so we’re very keen that the contractors have the space to do their work so we can keep pushing hard towards the service launch in May.”

Once the first tests have been made on the whole line a gradual increase in tram movements will be made and eventually there will be in excess of 150 test trips a day, five days a week. The plan remains that the first passenger trips will be made in May 2014 although if testing proves to be a success this date may be bought forward. 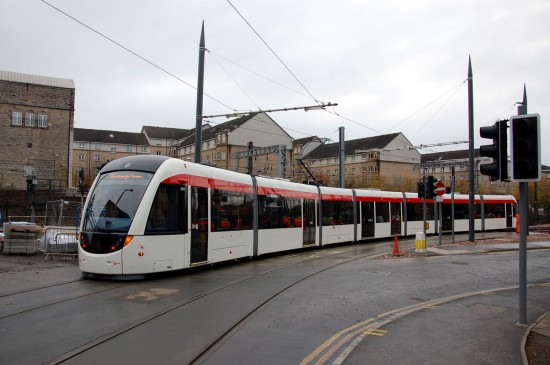 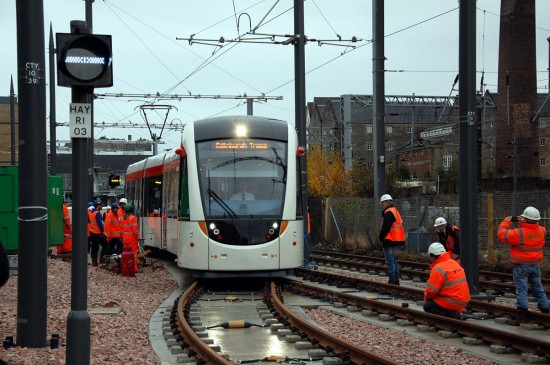 Engineers keep a close eye on 264 as it tests the crossovers at Haymarket. 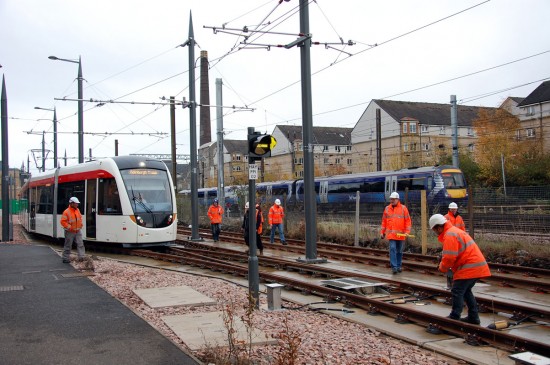 The proximity of the main national rail line is seen here as a Scotrail class 170 speeds past 264 which continues to test the track at Haymarket (All photos: John Hampton)